Massive protest in Quebec against huge hike in tuition fees

About 200,000 university and college students across Quebec shut down their campuses on November 10 to protest a projected 75% increase in tuition fees in the recent budget of the Liberal government headed by Jean Charest. Up to 30,000 students and supporters marched in Montréal, while other demonstrations were held in some other regions. Here is a video of the Montréal demo:


The students were joined by smaller but significant contingents from some unions and other social movements. Marching with them were professors, teaching assistants and support staff. The university rectors and principals characterize the steep increase in fees as “reasonable,” and say it will be compensated for students from low-income families by increased loans and bursaries. The students point out, however, that it will only aggravate their indebtedness. “Eighty percent of the students are without access to financial assistance,” says Léo Bureau-Blouin, president of the Fédération étudiante collégiale du Québec (FECQ). “Once a family makes $60,000, it is no longer eligible.”

Further actions are being planned, student leaders report. With the support already of about 10 Quebec student associations, an unlimited general strike could well take place this winter if the government does not retreat, Gabriel Nadeau-Dubois, a spokesman for the Association pour une solidarité syndicale étudiante (ASSE), told Le Devoir. “This was the final warning for the Charest government.”

Québec solidaire (QS), which had a large contingent in the Montréal demo, published a four-page tabloid newspaper for distribution to the student demonstrators. It featured the party’s call for “free tuition from kindergarten to university” and an “end to public financing of private schools.” Here is its front page: 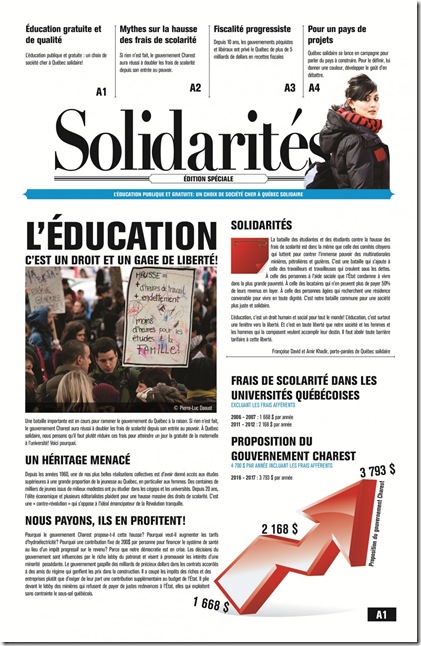 Addressing the demonstrators on behalf of Québec solidaire, Amir Khadir (the QS member of Quebec’s National Assembly) pointed to some of the alternative sources of revenue that might be used to pay for higher education: royalties on industries and business for their use of water, considered a “loaned” public property; increased royalties on mining production; restoration of capital taxes for financial firms; and increased taxes on the richest individuals. “He can go and find 5 billion dollars with these measures,” said Khadir. “Why choose, out of ideology, to ignore that?”

However, notes QS activist Marc Bonhomme, neither the QS tabloid nor Khadir indicated how they proposed to fund free education, let alone the massive reinvestment in health, public transport and energy efficiency that is also needed.

The colourful, enthusiastic demonstration in Montréal, says Bonhomme, showed that this demo was not the traditional trade-union “heroic last stand” before capitulation, or a safety valve with no follow-up. This was something new, as the students loudly demonstrated when some speakers raised the possibility of a general strike.