Dr. Monia Mazigh was born and raised in Tunisia and immigrated to Canada in 1991. She speaks Arabic, French, and English fluently and holds a Ph.D. in finance from McGill University. Dr. Mazigh has worked at the University of Ottawa and taught at Thompson Rivers University in Kamloops, British Columbia.  In 2004, she ran in the federal election as a candidate for the New Democratic Party, gaining the most votes for her riding in the history of the NDP.

Dr. Mazigh was catapulted onto the public stage in 2002 when her husband Maher Arar, was deported to Syria where he was tortured and held without charge for over a year.  During that time, Dr. Mazigh campaigned vigorously for her husband’s release and later fought to re-establish his reputation and sought reparations. In January 2007, after a lengthy inquiry, her husband finally received an apology from the Canadian government and was offered compensation for the “terrible ordeal” his family had suffered. Dr. Mazigh has since authored a book called Hope and Despair, published with McLellan and Stewart in 2008. The memoir documents her ordeal after her husband was arrested and how she campaigned to clear his name.  -- Richard Fidler

Canada is in celebratory mood this year, celebrating the 150th anniversary of the birth of the Confederation. The Canadian government has been funding cultural initiatives here and there to promote the diverse communities living together and to bring the multicultural aspect of Canada.

Internationally, Canada is portraying itself as an open country, accepting refugees from war ravaged countries like Syria. A sort of the antithesis of the American policies recently announced by U.S. President Trump to ban refugees. Prime Minister Justin Trudeau describes himself as a feminist, taking selfies with young Muslim girls in hijab. A sharp contrast with the previous prime minister, Stephen Harper, whodefunded the Ministry of Status of Women and dehumanized Muslim women by fomenting the niqab debate.

However, amidst this festive and open atmosphere, there is a dark cloud that keeps the rays of the sun from reaching everyone. The case of Omar Khadr is a black stamp on Canada’s human rights record. 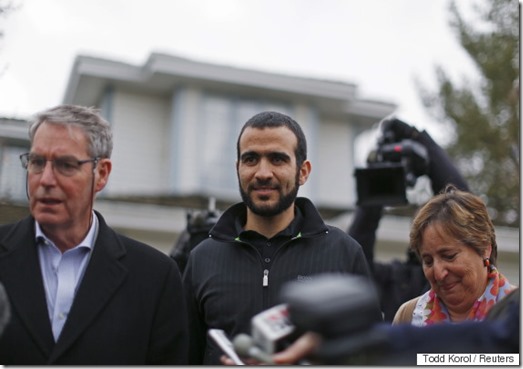 Lawyer Dennis Edney (L), client Omar Khadr and Patricia Edney meet the media outside their house where Khadr stayed after being released on bail in Edmonton, Alta., May 7, 2015.

Omar Khadr was a child when he was imprisoned by the Americans in the military base of Bagram and later airlifted to Guantanamo Camp, where he was forcibly kept for over a decade. He was subject to physical and psychological abuses. He was betrayed by successive Canadian governments: Liberal and Conservative alike wanted him to stay in jail, far away from the public eye and TV cameras. No other western country dealt with its citizens detained in Guantanamo like Canada shamefully did.

Along these years, some prominent Canadian voices rose up to denounce the treatment of Omar Khadr, but they were not enough to deter the Paul Martin government, and later the Harper government, in refusing to call for the repatriation of Omar Khadr. In fact, then-prime minister Harper and his cabinet ministers kept justifying Omar Khadr’s incarceration by the fact that he was convicted in the killing of a U.S. paramedic. Needless to say, this conviction came as the result of a plea bargain Omar Khadr had made with his American jailors to gain his transfer out of the Guantanamo prison.

Even when Omar Khadr was returned to Canada after the insistence of U.S. Secretary of State Hillary Clinton, he was immediately imprisoned and kept there for three more years.

These days, the case of Omar Khadr has slipped under the radar. Even some human rights activists think that the return of Omar Khadr back home would mark the end of his tragic story. But it wouldn’t. Omar Khadr never received any apology for the treatment he was subjected to in Guantanamo.

For instance, in 2008, Canadians officials flew to Guantanamo specifically to interrogate him and were never interested in his well-being. They offered to buy him a burger and some treats to get information out of him. When he understood that they were there for their own professional interests and not for helping him, Omar Khadr, became uncooperative with them. The Canadian officials pushed him to say what he clearly didn’t know. This behaviour is reprehensible and should be denounced. Unfortunately, Canada never distanced itself from the actions of its officials despite the reprimand of the Supreme Court ruling declaring that Omar Khadr’s rights were violated under the Charter of Rights.

Dennis Edney, the Canadian legal counsel for Omar Khadr, has been a hero in defending his client. Not only did he defend Omar Khadr under difficult circumstances, but he also accepted him in his home and protected him as one of his own children. Recognizing the work accomplished by Dennis Edney on behalf of Omar Khadr should be celebrated by all Canadians and not fought or hidden.

Recently, Omar Khadr had to undertake a 19-hour-long surgery on his shoulder as a result of bullet wounds he suffered when he was shot in the back by the U.S. military. This serious surgery will undeniably delay Omar Khadr’s efforts to progress in his studies and life.

Omar Khadr was stripped of his rights as a child, as a teenager and later as an adult. Today, he is trying hard to put his life back on track and get the education that was denied to him all these past years. As long as Omar Khadr file is still lingering, Canada won’t be able to hide its dark face and celebrate its record on the world scene. It is time for the Canadian government to act swiftly and let the sun shine on Omar Khadr’s life.

This article was published on the Huffingtonpost:

Posted by Richard Fidler at Thursday, April 13, 2017 No comments: