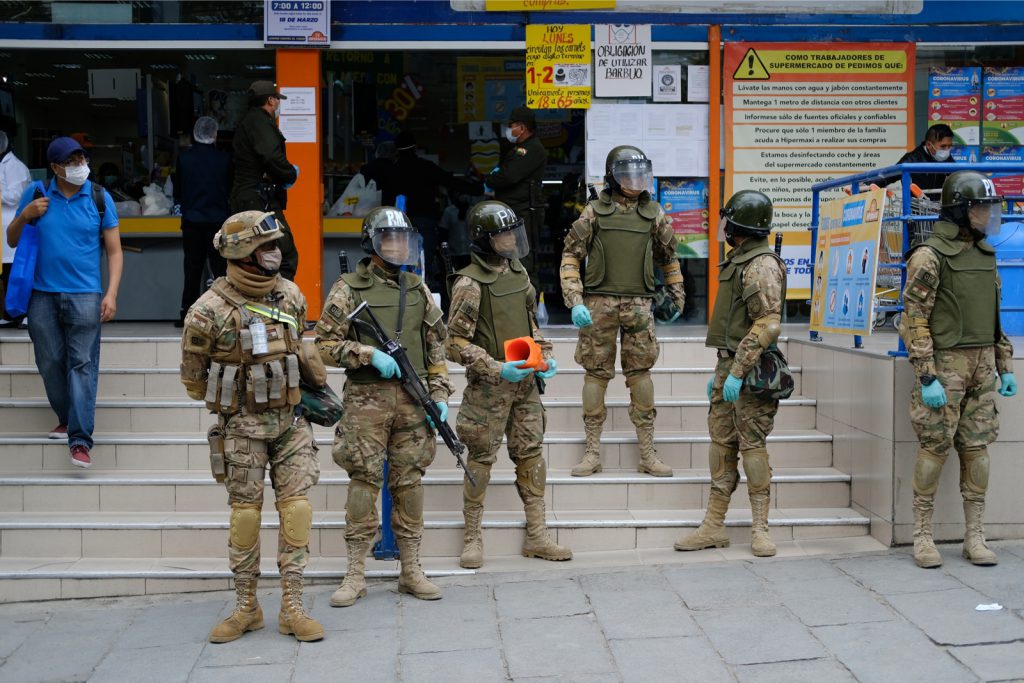 An opinion piece published in the May 1 Globe and Mail offered a blatant example of how the COVID-19 pandemic is being used by imperialist politicians to mobilize support for their own agendas. Authored by former Canadian foreign ministers Lloyd Axworthy (Liberal) and Joe Clark (Conservative), and cosigned by two former and present U.S. State Department officials as well as a former official of Peru’s rightist governments, it issues a renewed call for the overthrow of Venezuela’s government, alleging that the country’s response to COVID-19, among other things, makes it “a threat to regional peace and security.”

“The crisis in Venezuela,” they claim, “has moved from an internal tragedy to a threat to regional peace and security, with increasing political breakdown, growing COVID-19 infection, and disarray in its internal fuel market. Its hungry and battered people are the victims. The country is in line to become the first failed state in the Americas without a functioning economy or government, with warring factions carving up territory.”

The authors call on the United Nations to negotiate presidential elections in Venezuela that will create “a space for a reformed successor movement to Chavismo,” a term used by the elected Maduro government to describe its program. The “transition government” proposed by the Trump administration, they say, “should be part of the design of this framework, opening the door to the U.S. linking sanctions relief to a credible agreement on broad humanitarian support and a full electoral process.”

That is their only mention of the crippling sanctions imposed on Venezuela in recent years by Washington, Ottawa following in lockstep. While the sanctions have imposed mass suffering on the Venezuelan people, they have failed to dislodge the Maduro government. Failed as well is the attempt by Trump, Trudeau and their allies to mount a coup in Venezuela through Juan Guaido, an opposition politician who proclaimed himself president in January 2019. As the Globe article indicates, they cynically hope to use the COVID-19 threat in yet another attempt to get their way in Venezuela.

The following article by Federico Fuentes documents how Venezuela’s actual response to the pandemic is very different not only from the sordid portrayal in the article by Clark-Axworthy and their Lima Group co-authors, but also from the very different response of the Anez coup government in Bolivia, enthusiastically supported by Washington and Ottawa and their allies. As of May 2 Bolivia registered its highest daily increase yet of COVID infections, 241, taking the total to 1,470, 71 of whom have died. Venezuela, in contrast, reported 10 new cases, bringing the total to 345, with 10 fatalities.

Government responses to the COVID-19 pandemic have put into sharp relief their true nature. This is perhaps no more evident than when we compare Bolivia and Venezuela.

Despite having been installed as “interim” president after a coup last November, Jeanine Anez is presented in the media as leading Bolivia’s “transition back to democracy”. On the other hand, Venezuelan president Nicolas Maduro is regularly described as a “tyrant” or “dictator” presiding over an “authoritarian regime”.

Yet, when we compare how these governments have responded to COVID-19, it is clear these labels bear little resemblance to reality.

In Bolivia, the government was quite slow to react to the pandemic and, when it finally acted, did so in an incoherent manner.

Eight days after the first cases were detected on March 10 the government closed the country’s borders and initiated a nightly curfew from 5pm–6am. But the curfew only served to raise the number of people on the streets at certain times of the day, thereby worsening the probability of contagion.

The government then shifted to a complete lockdown on March 22, imposed under threat of large fines (up to $450) and jail time (up to 10 years) for those who did not comply. Police and military were granted special powers to ensure compliance.

By April 11, almost 10,000 people had been arrested for violating lockdown restrictions. In comparison, Bolivia had only carried out 4800 COVID-19 tests by April 23.

In terms of alleviating the economic impacts of the lockdown, the government did not issue its first social security payments until mid-April. The government has also said it will subsidise basic utilities and provide companies with loans to cover wage bills.

In the midst of the pandemic, health minister Anibal Cruz resigned on April 8, but not before rejecting Cuba’s offer to help the country fight the virus. Hundreds of Cuban doctors were expelled from Bolivia shortly after Anez assumed power.

Cruz later revealed that modelling indicated Bolivia was facing the prospect of 3840 deaths from COVID-19 within 4 months. He was replaced by Marcel Navajas, who said expanding testing was not a priority, despite World Health Organization recommendations stating it is vital to any strategy to contain the virus.

Bolivia has also been extremely slow to allow hundreds of its citizens stranded in Chile to return home. After initially announcing on March 30 that 150 Bolivians would be allowed in, the government backtracked and said the border would remain closed.

Almost a week later, the first 480 Bolivians were finally allowed to cross, with a further 430 given permission on April 21. Hundreds more continue to wait their turn.

The government, however, has not wasted time in using the crisis to crack down on its main political rival, the Movement Towards Socialism (MAS), accusing it of seeking to break the lockdown to distribute food and other supplies to those who need it.

It also postponed the May 3 general elections. The most recent polling showed MAS candidate Luis Arce as the clear frontrunner (leading by about 15%), with Anez in third place.

Despite supposedly heading an “interim” government, installed with the sole purpose of convening new elections, Anez has used the lockdown — during which protests are banned — to overturn previous MAS government policies. These include lifting the ban on tin concentrate exports; allowing the state public works company to contract work without going to tender; and eliminating certain agricultural tariffs.

The economic minister has also flagged ramping up the use of genetically modified organisms in agriculture, tax relief for big business and increased foreign investment in natural resource extraction, as part of its “recovery” plan. All without any constitutional or popular mandate.

The situation in Venezuela is starkly different.

Unlike Bolivia, Venezuela was much quicker to move, contacting China early to obtain details about how it dealt with the pandemic. On the basis of this information, it obtained a huge number of COVID-19 testing units and personal protective equipment for health workers.

Today, it leads the region in terms of testing, having carried out more than 350,000 tests. Due to this testing regime, it has only detected 288 cases and registered just 10 deaths, despite having a population two-and-a-half times larger than Bolivia.

Rather than focus on punitive measures, the Maduro government has prioritised policies to alleviate the social and economic impacts of the nationwide lockdown that began on March 17. Among the measures it has taken are a 100% wage guarantee for all workers, a moratorium on rent and loan repayments and social security payments for a range of sectors, including informal sector workers.

Importantly, the lockdown has not meant a complete halt to the circulation of people. Instead, doctors, together with local community activists, have been going door-to-door to seek out potential cases of COVID-19. They have been aided by the government’s online Homeland Platform system, through which people can notify authorities if they have any symptoms.

The same system has also been used to gauge citizens’ opinions on certain measures. For example, a poll was taken in mid-April to see if parents wanted schools to complete the schooling year via distance education and, if so, what would be the most appropriate mechanism to use (internet, radio, dropping off books with exercises).

Community activists have mobilised to distribute copies of a government-issued book (also available online) containing 101 measures to prevent the spread of COVID-19. The book is made up of written testimonies from residents of Wuhan recounting how they dealt with the outbreak.

Venezuela, which has experienced a wave of mass emigration in recent years due to the country’s economic situation, had received more than 20,000 returning citizens from neighbouring Colombia and Brazil by April 24. Approximately 600–650 more citizens are crossing the border each day, where they are tested and quarantined.

Given the discriminatory policies of many countries that have left migrants without protection, hundreds more Venezuelans have been flown back from Europe and the United States, in many cases on specially chartered flights organised by the government.

Venezuela has been able to pursue its people-first policy in spite of the fact that its health system has been devastated by extensive trade and financial sanctions imposed by the United States and European nations. Reports estimated the death toll from the impact of the sanctions was more than 40,000 in 2018 alone. Others claim the tally is now more than 100,000.

Because Venezuela represents an alternative to the profit-driven capitalist system, the US has chosen the COVID-19 crisis as a time to ramp up its attacks on the Maduro government.

Media outlets, rather than continuing to distort information, should be actively questioning why the US, amid a global pandemic, is supporting a repressive regime in Bolivia that is proving inept at dealing with COVID-19, while it tightens a sanctions regime that is putting lives at risk in Venezuela.