Defend the people of Catalonia against assault by the Spanish state! 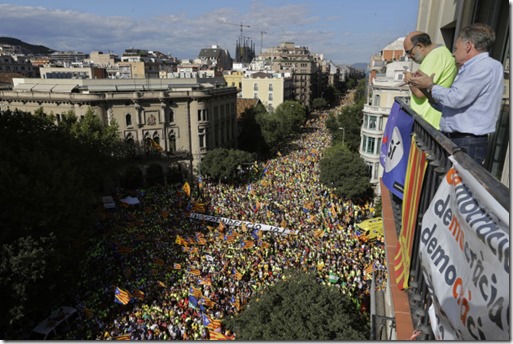 Hundreds of thousands mobilize in Barcelona on Catalonia’s national day.

The Spanish government of Mariano Rajoy has unleashed a wave of repressive measures in a desperate attempt to block the October 1 popular vote on independence in Catalonia.

It has jailed more than 20 Catalan political leaders and officials, taken control of the finances of the Catalan “autonomous commune,” seized millions of referendum ballots, posters and leaflets, and cut off internet access to relevant government web sites.

Meetings in public buildings have been banned and more than 700 municipal politicians have been threatened with arrest and prosecution for helping to organize the referendum.[1]

But tens of thousands of Catalans are in mass revolt. “Only too conscious of this reminder of Civil Guard operations during the Franco dictatorship,” reports Barcelona correspondent Dick Nichols in Green Left Weekly, “they protested outside the buildings being raided and occupied the centre of Barcelona and other Catalan cities and towns.

“People were responding to the call of the Catalan government and the Catalan mass organisations — the Catalan National Assembly (ANC) and Catalan language and culture association Omnium Cultural — to maintain peaceful mass protests up until October 1. The aim is to make the Spanish government pay the highest possible price for its ‘de facto coup’ (phrase of Catalan Premier Carles Puigdemont).

“Their call was also backed by political forces and institutions that do not necessarily support Catalan independence, but defend Catalan sovereignty. For example, Barcelona Mayor Ada Colau publicly backed the street protests and warned Rajoy that he would find ‘the Catalan people more united than ever.’

“In Madrid, radical anti-austerity force Unidos Podemos condemned the raids. Its MPs in the Spanish parliament staged a protest outside the building and later joined a rally in support of Catalonia’s right to decide. The Madrid rally, held in the central Puerta del Sol, was one of at least 40 that took place across the Spanish state on the evening of the raids.

“Twenty major institutions of Catalan civil society representing 3000 Catalan social organisations — including the two main trade union confederations... — condemned the raids. They called for the release of the detainees and reaffirmed their support for Catalonia’s institutions.”[2]

The October 1 referendum was called by the Catalan National Assembly following years of frustrated attempts by the Catalan authorities to negotiate increased autonomy for their nation within Spain, rejected repeatedly by the central government and the major political parties along with the Constitutional Court, which in 2010 rejected an autonomy agreement worked out between Barcelona and Madrid. Since then the movement for autonomy and state independence has grown rapidly; each September 11, the Catalonian national day, a million or more Catalans — in a territory with only 7.5 million people — have demonstrated in the streets in defense of their right to national self-determination.

The current repression is an ugly reminder of their treatment under the 1939-75 fascist dictatorship of Francisco Franco, when even the public use of the majority Catalan language was prohibited.

Following Franco’s death, the major capitalist parties, including the Spanish Social Democracy, negotiated a new constitution in 1978 headed by a monarch. Although it established a parliamentary democracy, most of the fundamental institutions of the Francoist state remained intact. Although it allowed partial autonomy to Catalonia, the latter’s Statute of Autonomy is subordinate to the Spanish Constitution. The conservative Rajoy government in Madrid has resisted with increasing vehemence Catalonia’s requests for more powers to defend and develop its national culture and society.

As Catalan revolutionary socialist Esther Vivas has written, “the battle of October 1 is not only about independence. What is at stake is the future of the political and institutional framework established in 1978.”[3] Spanish Marxist Jaime Pastor argues that “the referendum would help to democratize Spain.”[4]

Unfortunately, the repression in Catalonia has elicited no criticism from the European Union; in a typical reaction, the Macron government in neighboring France calls instead for “respect for the Spanish institutional framework.”[5]

The Trudeau government is silent, as well. But in Quebec, leaders of nationalist organizations and pro-independence political parties have issued a strong statement of solidarity with the Catalans. See the text, below, in my translation. And some are organizing demonstrations against the repression in Montréal, Ottawa and possibly other cities.

However, when Parti québécois leader Jean-François Lisée challenged Liberal premier Philippe Couillard in the National Assembly on September 21 to join in telling Spain “Respect the democratic process in Catalonia,” Couillard refused to do so. Instead, he maintained that while he was “concerned” by the events, “Spain is a democratic country” and he would not interfere “in the political debates under way in Spain.”

And in a cheap shot aimed at the PQ, he warned that supporting the right to self-determination of peoples could backfire on Quebec: “Considering that we have a nation-to-nation relationship with the First Nations, what would happen if Quebec were to separate from the Canadian federation and all the First Nations, at least half of Quebec, decided to exercise their self-determination and not follow the separated Quebec?”

Lisée, taken aback, responded by reminding the premier that both the PQ and the Liberals are on record as subordinating indigenous autonomy to “the territorial integrity” of Quebec. He noted that Law 99, adopted by the Assembly under a PQ government in response to the federal parliament’s Clarity Act, upheld this “territorial integrity” should Quebec become independent.

And indeed, neither of these capitalist parties — in contrast to Québec solidaire, which was not a participant in this parliamentary exchange — upholds the right of self-determination of the indigenous First Nations. But that is a topic that I will address in a forthcoming article. The exchange between Lisée and Couillard ended as a shabby substitute for the needed statement of official Quebec solidarity with Catalonia. As for the silence of the left in English Canada, it speaks for itself.

Prison vs. Ballot Boxes in Spain: a Toxic Cocktail in a Democracy

As democrats, we feel an obligation to protest strongly to the government of Mariano Rajoy. After having deployed in 2010 the arsenal of the Constitutional Court to block an agreement that granted further autonomy to Catalonia within Spain, this government is now working to block the electoral process of the Catalan people. Over and above the right of peoples to self-determination, recognzed in the United Nations Charter, it is democracy itself that is now being battered.

This is intolerable. It is intolerable to turn our heads and leave to their fate the Catalan people, denying them in the eyes of the entire world the right to vote and declare where they stand on their political future. It is intolerable as well to see a country like Spain, which claims to be a democracy, threaten to prosecute, even imprison, mayors and members of the Catalan government on the sole ground that they are organizing or collaborating in the organization of a referendum. Prison against ballot boxes is a toxic cocktail in a democracy.

Spain is hiding behind the decision of the Constitutional Court, which is now claiming that the referendum fervently demanded by the Catalan people and decided by their Parliament is illegal, when it is the Spanish government that itself solicited this opinion. We wish to remind the Rajoy government that holding a referendum is, in the first place, a political decision that could perfectly well have been agreed with the Catalan Generalitat, as was done in similar circumstances in 2014 between the United Kingdom and Scotland. There is no future in trying to prohibit to a people the right to express themselves on their political status.

To express our solidarity

The Catalan people are conducting an examplary battle in defense of this “right to decide,” which has many times led them to take to the streets peacefully. They are not alone in this struggle. The Québécois have twice managed to vote on their political future, in 1980 and in 1995, notwithstanding the arsenal deployed by the federal government: violation of the rules of referendum participation, application to the Supreme Court to rule on Quebec’s right to secession, adoption of the Clarity Act, and more recently a court challenge of Law 99[6] adopted by the National Assembly. Today it is the turn of the Quebec people to express their solidarity with the Catalan population in its legitimate right to declare itself democratically on its political status.

We call on the Spanish government to cease adding to the mess for which everyone, including Spain, will pay the price. Its intransigence and its authoritarian drift have already done a disservice to its cause, as many Catalans have now left behind the autonomist nationalism they have practiced historically in order to embrace the cause of independence. The Spanish government must put an end to the escalation by forthwith renouncing the heavy-handedness, the antidemocratic maneuvers and the threat to withdraw its current autonomous status from Catalonia.

Mr. Rajoy’s government has overstepped the mark not only by trying to confiscate election materials, but by going so far as to seize the leaflets of the yes camp. It doing so, it offends against freedom of expression, devitalizing and undermining democracy.

Finally, the atmosphere of threats and intimidation currently prevailing in Catalonia is unhealthy and dishonours Spain and the efforts of the international community to base the functioning of our political institutions on values of democracy, peace and respect for people’s rights.

It is up to the Catalan people to decide alone and in full freedom their political future, and we, faced with so many atrocities, must be numerous in expressing our solidarity with them and coming out in defense of democracy.

Report of the International Group of Experts, “The Catalan Independence Referendum: An Assessment of the Process of Self-Determination,” IRAI, September 2017.

[2] For extensive coverage of the Catalan movement, see the coverage in Links, International Journal of Socialist Renewal, including The Catalan national struggle and the left in the Spanish state—a dossier.

[4] Jaime Pastor, “El referéndum ayudaría a la democratización de España,” El Nacional, August 6, 2017. See also Pastor’s interview (translated), “If I were Catalan, I would have no choice but to vote yes to independence,” Life on the Left, July 20, 2017.

[6] An Act respecting the exercise of the fundamental rights and prerogatives of the Québec people and the Québec State.

Posted by Richard Fidler at Saturday, September 23, 2017 No comments: