Quebec’s movement against climate disaster has been given a major boost by Gabriel Nadeau-Dubois, the former student leader who just received the Governor General’s Literary Award for his book on the 2012 student strike.

Nadeau-Dubois announced Sunday night, during his appearance on the popular television program Tout le monde en parle, that he was giving the $25,000 prize money to a 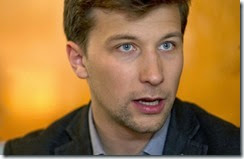 Quebec organization campaigning against the projects to pipe dirty tar sands oil across Canada and through Quebec. At the same time, he launched a web site aimed at doubling that amount. By 11:00 p.m. Quebec time the site had already raised $80,000. (At the time of this post, the total had reached $150,000!)

The anti-tar sands organization in question is a coalition of Quebec groups, including Stop Oléoduc, Alerte Pétrole, and supported by Équiterre, Nature Québec and Greenpeace.

The funds raised will be used to encourage and facilitate citizen mobilizations, Nadeau-Dubois told the Montréal daily Le Devoir. “We have a collective choice to make in Quebec. The Northern Gateway pipeline to British Columbia has been blocked, the Keystone XL project is stalled in the United States, so the pressure is very strong to get the pipelines going through Quebec.”

“Yes, the issues include protection of the territory, protection of our water sources, our rivers, but there is also a global issue. If we allow the passage of this pipeline [Energy East] through Quebec, it means we are agreeing to participate, as Québécois, in the expansion of the tar sands industry. However, if we say no, we are making a tangible move in the fight against climate change.”

Gabriel Nadeau-Dubois explained the reasons behind his decision in the following article, published today in Le Devoir. My translation.

“I give this award to those who defend the true country”

Last week, the Canada Council gave me the Governor General’s Literary Award for my essay Tenir têt. This honour is accompanied by a grant of $25,000. I had not expected this award and once the surprise was over, I was struck by a strange feeling, a mixture of pride and embarrassment.

I was very touched by this reward, but less delighted by the monarchist countersignature that goes with it. My independentist convictions, my progressive sensibility,

my conception of democracy, and perhaps the habit of seeing the present representatives of power spurning my values predisposed me to refuse this award. At first, that’s what I thought I should do.

But thinking about it, I changed my mind. There is no need to confuse the name with the thing. This prize is chosen by a jury of peers composed of women and men from the world of arts and letters. Awarded by a public institution, the Canada Council for the Arts, it reminds us of society’s attachment to culture, thinking and literature, which are among the essential conditions of liberty. It is an important reminder in a period when the executive power scorns intellectuals, the state apparatus muzzles science, the Prime Minster recommends using sociology with moderation.

Subservience is always an imposed ignorance, and democracy is necessarily a shared knowledge. My essay, Tenir tête, which describes the student strike of 2012, is based on that conviction.

The list of winners of this award is intimidating. And it is inspiring. In 1968, Fernand Dumont received the same award. He decided to accept it, but he hastened to deliver his cheque to René Lévesque. Why? Because the politician was fighting to make reality the ideas that Dumont’s books defended. Last year, the young indigenous poet Katherena Vermette accepted the honour as well, explaining that she would use it to defend the self-determination of the First Nations.

I too think that it is not enough to honour ideas, they must above all be implemented. Instead of symbolically refusing the award, I decided to see it as an opportunity to move things forward in a material way.

Quebec is now at a crossroads. The Conservative government, supported by the other two federalist parties, supports the Canadian oil companies that want to transform the country into a highway for Alberta’s dirty petroleum. These pipeline projects, above all Energy East, would impose inordinate risks on our environment in return for the trivial economic benefits we would get. What is now at risk is the integrity of the entire St. Lawrence valley, the heart of our pays réel [true country].

The Quebec Liberal government’s weakness and indecisiveness on these issues is explained primarily by its blind acceptance of Canadian petro-federalism. As his recent statements indicate, Philippe Couillard is passively supporting the insane project of involving Canada as a whole in the interests of the West’s oil companies, in contempt of the peoples who live there. As for me, I am convinced that, hand in hand with the First Nations, we must not give up on remaining maîtres chez nous (masters in our own house).

Every day frightening reports by scientists warn us against the economic disaster represented by the warming of the planet, a major contributor being this dirty petroleum. In Ottawa, they refuse to listen to these scholars. They refuse to subject their desire for easy profits to the principle of reality. Petro-federalism lives in denial, the deliberate ignorance of the consequences of its acts. It is government by the irresponsible.

With all due respect to those who want to sell Quebec for a mess of pottage, more and more people are opposing this dispossession. In recent months, citizens everywhere have been organizing in the campaign “Coule pas chez nous! [Not in our yard!], to remind the federal government and the provincial leaders that we have the means to choose another path toward our collective prosperity: the path of economic and political self-determination.

I have therefore decided to give the $25,000 accompanying this award to the “Coule pas chez nous!” campaign. Beginning today, I urge everyone to join with me to double this amount by making a donation on the web site doublonslamise.com. Join me in helping those who are defending the collective interests of Quebec.

Posted by Richard Fidler at Monday, November 24, 2014 No comments: