The ‘Free trade’ Agreement of 1989, a decisive moment in the rise of neoliberalism in Canada 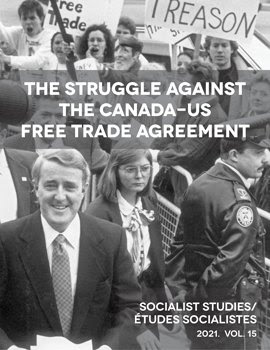 From the introductory article, “Reflections on the Struggle Against the Canada-US Free Trade Agreement (FTA), 30 Years Later,” by Chris Hurl and Benjamin Christensen:

“The implementation of the Canada-US Free Trade Agreement (CUSFTA) in January 1989 marked a decisive moment in the rise of neoliberalism as a political project in Canada. While the left, and socialist political economists in particular, played a central role in galvanizing [opposition to] the agreement and contributed in no small part to the demise of the Conservative government in 1993, the free trade agenda continued to move forward through the 1990s. This Special Issue revisits the history of struggles against free trade in Canada with two aims in mind: first to remember the coalitions through which opposition was organized, the mobilization of socialist critiques by activists and intellectuals, and the key events leading up to the adoption of the agreement. Second, drawing from this history to make sense of how things have changed over the past 30 years, as right-wing nationalists have increasingly taken the lead in opposing free trade, while neoliberals have sought to rebrand their project as ‘progressive’. How can those on the left effectively confront the project of free trade today while at the same time challenging both far-right nationalism and neoliberal globalization?”

I recommend in particular the article by Marjorie Griffin Cohen, “Confronting Power, Money and Most Economists: The Class Action of the Anti-Free Trade Movement.” The Canadian movement against this novel trade and investment deal, she writes,

“was a genuine ‘movement’ that originated locally in many different places throughout the country and was soon consolidated in a loose coalition at the national level. It was extraordinary for several reasons. First, it brought together a large number of groups that had never worked with each other before and their coalitions were strong and effective. Second, it was a movement based on class issues and was understood that way by its leaders and most of those who participated in it. Third, it democratized thinking and knowledge about economic policy, and this, in turn, meant that many groups and issues that were normally absent from a discussion of macro-economic policy, became central to the debate. Fourth, the critical arguments that developed over time focused on the problems of having market mechanisms dominate both the economic and social spheres. This scrutiny and discussion of the market system itself has not been replicated in debates on any subsequent major policy issue.

“The loss of the free trade election in 1988 and the subsequent proliferation of comprehensive international free trade agreements profoundly changed Canada. [...] [Y]et the many successes of the anti-free trade movement should be remembered for the way it propelled masses of people to deal with an issue that, until then, was in the hands of government, business, and mainstream economists. It showed that thinking about economics could be shifted away from establishment professionals to become more accessible and that large groups of people can focus on complex details, such as those in the proposed agreements, as they develop their analyses and strategies.”

This issue of Socialist Studies can be accessed here. The issue was launched at an on-line panel on March 19 featuring, in addition to Cohen’s comments, presentations by Professors Bill Carroll and Paul Kellogg, and Claude Vaillancourt of ATTAC-Québec. It is to be hoped that the journal will soon make their analyses and other articles in this issue available to non-subscribers.