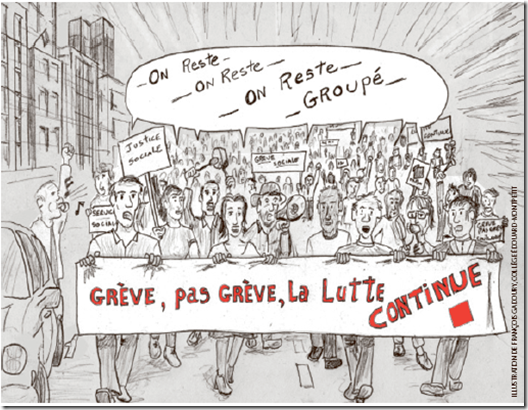 ‘Strike or no strike, the struggle continues’

The following is my translation of a feature article in the Autumn 2012 issue of a 16-page tabloid produced by Profs contre la hausse (Profs against the fee hike), the group of university and college professors that helped to mobilize support for the striking students in Quebec’s “printemps érable,” or maple spring. The newpaper bears the evocative masthead “Ceci n’est pas La Matraque des profs contre la hausse,” the matraque, or police truncheon, referring of course to the brutal repression of student demonstrators by the cops.

During the strike this spring, a statement (“We are all students”) issued by Profs contre la hausse was signed by more than 2,000 professors.[1] The current issue of the profs’ newspaper, which is subtitled “The spring continues,” states on its front page: “We present this newspaper to the students, who, through their unprecedented mobilization, were able to revitalize the Quebec political landscape. Their powerful speeches and their creative opposition to the bards of austerity and the ‘fair share’ inspire us in our own practices of political freedom.”

The spring student strike is quite probably the inaugural act of a new period of social conflict in Quebec, analogous to the struggles that are traversing the other societies beset by the similar exhaustion of a neoliberal political economy. After three decades of relative “civil peace” (1982 to 2012) and neoliberal bracketing of conflicts, Quebec could be entering an era of political and cultural awakening in which it is once again possible to hope for a fundamental transformation of economic and social relations. Such changes do not occur without arousing strong resistance, and the social offensives needed to drive them forward must be equally combative.

It was precisely based on such analyses that the ASSÉ, then the CLASSE,[2] prepared the big strike of 2012. It was necessary, from the outset, to link the fight against the increase to a more comprehensive challenge to the neoliberal state model, in particular the so-called “cultural revolution” of fee-based public services, a regressive tax system and privatization of the common heritage of the Québécois and aboriginal peoples. So for the CLASSE, at least, it was not simply a fight against the fee hike — which, to be sure, would have soon unraveled in a negotiated increase. Rather, it was a social struggle for free education and for a decommodification of the university system.

The so-called “radicalism” of the CLASSE is derived, as the expression suggests, from the fact that the analysis framing its strike action went to the root of the problem and grasped it in its totality: the fee increase and the commodity and corporate drift of the university system are products of a neoliberal political economy that is imposed on all aspects of Quebec society. This political economy is not an invention of Jean Charest’s Liberals; they systematized and adapted a more general model applied pretty well everywhere in North America, some key aspects having been installed by the PQ in the socio-economic summits following the 1995 referendum. 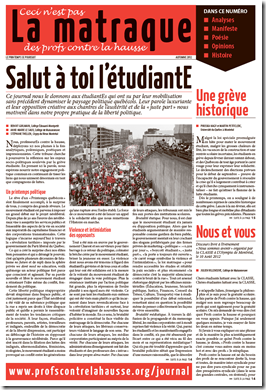 The former Conservative turned nationalist Lucien Bouchard passed the torch of austerity and competitive deregulation to the former Conservative turned Liberal Jean Charest who, at first, simply developed in complete coherence what was already implicit in Bouchard’s zero-deficit policy, then accelerated and generalized the establishment of the neoliberal model in Quebec. These developments followed a long period, between 1982 and 1995, of exhaustion of the social model established in the traces of the Quiet Revolution. The Quebec model of neoliberalism was also prepared through the construction at the federal level of its neoliberal macro-economic framework: free-trade agreement, conversion of unemployment insurance into “employment insurance,” a disinflationary monetary policy, financial deregulation, lower taxes and the fight against the deficit they provoked.

It can be said that the crisis of 2008 marked the end of this ascendancy of neoliberalism, both here and elsewhere in North America and Europe, for it was the crisis of the economic model it had spawned. Since then we have been caught in a trap that combines economic stagnation with austerity. There is nothing in the policies responding to this crisis that eases this tendency to stagnation. The elite has apparently turned its back on the growth on which, in theory, the viability of advanced capitalism rests.

Such is the political economy context of the coming social conflicts in Quebec: an anaemic economy, most incomes stagnating, and a state caught in the vice-like grip of an austerity that generates further stagnation, with greater austerity in response. This context is not peculiar to Quebec; the essential sources of this stagnation trap lie elsewhere, in the United States and Europe, and by opening up our economy we have made ourselves dependent on economic cycles over which we have no influence. The Plan Nord can only accentuate this dependency. In this context, what are the possible sequels to the social movement of the spring of 2012?

One way of thinking about the last three decades of neoliberal hegemony is to see them as thirty years of a one-sided “class struggle,” and one way of making sense of what began in the spring of 2012 is to understand it as the end of this one-sidedness. The class struggle is now working both ways. How can we understand neoliberalism as a one-sided class struggle? To understand that, a small detour through history is necessary. For the greater part of the 20th century, the political economy regime was characterized by a certain compromise between capital and labour, between big corporations and employees. The profits of the first rested on the consumption of the second, and firms were constrained to share their productivity gains with the workers so that the latter could (over)consume massively what was (over)produced massively. That was the major lesson learned during the crisis of the 1930s, a crisis of overproduction, underconsumption and under-investment.

From 1939 to 1980 in North America and Western Europe, real wages of the majority progressed from year to year, while everywhere the share of the wealth going to the most well-off (the highest 1% of incomes) decreased year by year, from the ceiling of 1930 to the floor of 1980. It was not through kindness or necessarily by far-sightedness that the capitalists were led to share the proceeds of economic growth. On the contrary, it was essentially thanks to the strength of the trade-union movement, the pressure exerted on the state by a mobilized citizenry, the presence in the political arena of left-wing parties, and the counter-model constituted by the so-called “communist” countries that the welfare state, and a form of partially socialized capitalism, developed.

Quebec’s Quiet Revolution arrived toward the end of this period, and constituted for us a sort of catching-up with an historical trajectory that was much longer elsewhere. Within a few years, Quebec acquired a modern social state and a progressive labour law; nationalized some major sectors of its economy; created the Caisse de Dépôt et Placement, the public university and college networks, and the health care system; made working conditions in the public sector a lever for raising conditions in the private sector; and, finally, equipped itself with the tools to develop its natural resources under its own control. Added to all this, a progressive tax system that took more from the well-off than from the majority, and that tapped into profits almost as much as wages, gradually but ineluctably reduced the power of the business elites and big corporations in the society and the economy.

Neoliberal policies are a struggle by the elites to reconquer the economic and political power they lost to the workers, whom they have managed to fragment into a multiplicity of groups, each forced onto the defensive, each attempting to preserve some acquisition that guarantees its dignity. The great secret of neoliberalism is that what we understand as the dismantling of some part of the social state, the privatization of some public service, the imposition of market competition in some sector, the deregulation of this or that is in fact a vast transfer of resources, wealth and power from “the commons” to the hands of the elite and their big corporations. That has been the true nature of the one-sided class warfare waged by the elite against society, for some thirty years.

That warfare could continue uninterrupted for as long as it held the promise that this was the only way to guarantee economic growth that would eventually allow the workers to increase their living standards. After the crisis of 2008, belief in the need for austerity helped to extend this context of one-sided struggle. But with the spring of 2012, the veil was lifted and the elite appeared for what it is: a class of “appropriators” who live and enrich themselves by transforming our collective heritage into their individual wealth and into assets for the big corporations. The future of the universities did not escape this logic, and the fee increase was an essential tool in this strategy of incorporation of the university. By challenging the increase in the name of free tuition, the movement altered the context. The struggle is now being waged by both sides. It is possible to think of a post-neoliberalism, and to go about constructing it. Over and beyond the electoral pause, a new era of change and social debate is opening before us.

[1] For an English translation, see “Massive demonstrations support Quebec students striking against fee hikes”; the statement is appended to the article.