Following a meeting with Quebec premier Pauline Marois, the ASSÉ, the militant wing of the Quebec student movement, announced February 13 that it will boycott the Summit on post-secondary education that the Parti québécois government is holding later this month. The premier and her Minister of Higher Education Pierre Duchesne were clear that they rejected any proposal that university tuition fees be abolished and would continue to favour indexing fee increases to consumer prices.

“We will defend the option of free tuition and we will try to block indexation in the streets,” ASSÉ co-spokesperson Jérémie Bédard-Wien told a news conference. The Summit, he said, will simply serve to “legitimate decisions that have already been taken behind the government’s closed doors.”

“They tell us we can talk about free tuition at the Summit but it is not possible,” said ASSÉ co-spokesperson Blandine Parchemal. “They are still 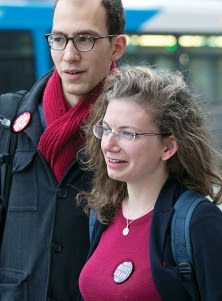 saying that free tuition is not affordable.”

The ASSÉ has produced a brief outlining the case it had planned to present at the Summit. Now it will present its case in a mass demonstration planned for February 26, following a one-day general strike of students when the Summit opens February 25.

The students have received some unexpected support from Jacques Parizeau. In an interview with Le Devoir, published February 12, the former PQ premier noted that free tuition was one of the objectives of Quebec’s Quiet Revolution of the 1960s. It could easily be financed, he said, if the PQ government were to re-establish the corporate capital tax and set aside its “zero deficit” objective.

The following article by Gabriel Nadeau-Dubois, a former co-spokesperson of the CLASSE, was published as an op-ed piece in Le Devoir on February 14. Nadeau-Dubois is currently appealing his conviction and sentence to 120 hours of community service for criticizing court orders limiting student strike activities during Quebec’s “Printemps Érable” last year. My translation from the French was originally published on rabble.ca.

By refusing free tuition, the Marois government voluntarily slams the doors to university for 27,000 people

One year ago to the day, my colleague Jeanne Reynolds and I announced the start by the CLASSE[1] of an unlimited general strike against the 75% increase in tuition fees announced by the Charest government. On February 14, 2012, there were barely 20,000 people who began to walk out. At that point we did not have the least idea that we were at the birth of what would become the greatest citizens’ mobilization in the history of contemporary Quebec. Where are we now, one year later?

In a week and a half, the Summit on higher education promised by the Parti québécois will open. It was presented during the election campaign as an opportunity to follow up on the important issues raised by the student movement in the spring of 2012, since it would go beyond the debate on the increase in tuition fees and address more generally the future of the Quebec universities. But with only a few days remaining before this exercise, it must be said that the PQ is unlikely to keep that promise.

By suggesting that free tuition is excluded from the possible scenarios, Minister Pierre Duchesne dismisses the position defended by a great many students and citizens last spring, and thereby undermines the credibility of his summit. The argument used by the minister and by the economist Pierre Fortin is revealing: they claim this measure would be too costly – because it would produce a 15% jump in university attendance! There is a price to having 27,000 more students attending school. This is a surprising admission, because it confirms the student movement’s argument that the level of tuition fees directly affects university attendance. And it also means that the Parti québécois government is prepared to voluntarily shut the doors of the universities to 27,000 people.

The never-ending argument about the government’s “ability to pay” is especially ironic given that it is the PQ leaders themselves who have tied their hands twice over: first, by their stubborn commitment to achieve a balanced budget as early as 2013, when the Conservative government in Ottawa (which can hardly be characterized as social democratic) has itself postponed that target by one year; and again by renouncing its own promises in relation to taxation (among them, to increase mining royalties and add another income tax bracket). On the one hand, this government voluntarily deprives itself of revenues, while on the other hand it claims it does not have enough latitude to open the university doors to 27,000 Québécois youth. No one, not even the ASSÉ, is claiming that free tuition can be established in two days. But can we not think of a plan for gradually reducing fees, even if it means in the short run opting for a freeze as a transitional step?

The need for a substantive debate

The last time we had some collective thinking about the Quebec education system was more than 50 years ago. At the time, the Parent report had set free tuition as a medium-term goal for Quebec universities, the freeze on fees being seen only as a step in that direction. Things have changed since then. The compromise of that day, between the need to stimulate economic development by creating a skilled labour force and the humanist principles of democratizing education and transmitting a common culture are today being eroded in favour of only one of these two poles, and we know which one. Between Guy Breton,[2] who declares without flinching that “brains [must] correspond to the needs of companies,” François Legault,[3] who “dreams” of “Silicon Valley, with Stanford and Berkeley universities,” and Line Beauchamp,[4] who says “the curriculum must respond to the needs of the companies,” a quite reductionist vision of education is being fashioned, one that assesses the universities primarily from the standpoint of their participation in economic growth.

You need only go to a single student demonstration to know that the students are indignant, not only at the increase in tuition fees, but also at this overly economistic slippage by our educational institutions. While discussions of financing and accessibility have their place at the Summit, it is regrettable to find that while the debate gets carried away over accounting issues the most important questions are left in abeyance. There is so much talk about how to finance teaching and research that we forget to ask about their ultimate purpose. What interests should guide the research that is talked about so much? What should we be teaching in our universities, and how?

Instead of showing political courage by tackling head-on the crucial and controversial question of the role of the universities, the Parti québécois is again closing the window opened by the student movement, locking the debate behind some sterile technocratic issues. Instead of being a real time for collective thinking, as the university community has been demanding for many years, the much awaited Summit looks more and more like a mere public relations operation aimed at pasting a veneer of political legitimacy on a decision already taken — to index tuition fees and continue with the quiet privatization of the universities. It is disconcerting to see the indifference to the Americanization of the university system on the part of this government, which claims to defend the culture and political autonomy of Quebec. If the Parti québécois remains even minimally committed to the ideals of the Quiet Revolution, it must demonstrate this now by envisaging free tuition and tackling the whole issue of the university’s mission. Otherwise, it will have demonstrated that its discourse about youth and the future was just electioneering, and that we must now build a society based on social justice without it.

We are told it is utopianism to defend free tuition and university autonomy. But the utopia is to think that a community can flourish without providing its young people with the broadest possible access to learning and culture. The student movement is accused of dogmatism when it firmly defends its positions. But in my view what is dogmatic is the government’s refusal to envisage a social agenda that not too long ago was widely accepted among Quebec’s politicians. Now they talk about this concept as if it were a radical fad. If the students are being accused of building castles in the air, perhaps it is because the politicians long ago opted in favour of a policy of levelling down.

Gabriel Nadeau-Dubois, a former co-spokesman of the CLASSE, is a graduate in History, Culture and Society at the UQAM, and now a philosophy student at the University of Montréal.

[2] Rector of the University of Montréal.