An important meeting of environmental activists is to be held in Montréal on June 6 to plan a concerted approach at the August Peoples’ Social Forum (PSF) in Ottawa. The meeting will coincide with the expected approval of the Harper government to the development of the Northern Gateway pipeline, which will convey chemically-treated bitumin (“dilbit”) from the Alberta tar sands to the west coast of British Columbia for subsequent export. 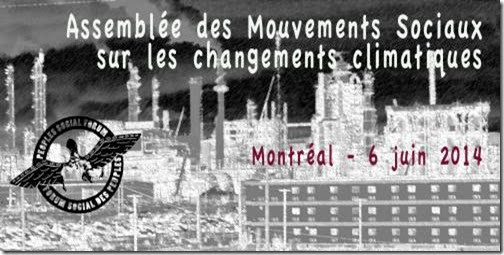 “The Conservatives rely so heavily on the increase of tar sands in order to achieve their economic extractivist program that they categorically deny that climate change is a very real problem. Other parties seem relatively cautious in raising the issue and haven't made any attempts at introducing an exit strategy from the fossil fuels, as has been done in many Nordic countries.

“The ball is therefore in our court as a civil society to ensure action. On June 6, this novel process will reunite forces from the East and the West, with Indigenous communities taking part in a massive non-partisan alliance in order to force the Conservative Party to modify its approach, as well as force the other parties to adapt their platform and broach the topic of climate change if they truly wish to replace Harper. The meeting in June will lead to a much larger meeting during the Peoples' Social Forum from August 21 to 24 in Ottawa, during which more than 10,000 people are expected to participate.

“The Assembly on Climate Change will be the first initiative gathering forces from all Canadian territories. Indigenous and environmental groups, citizens' associations, scientists, youth and all those who are active on this issue will be present.”

Roger Rashi, a central organizer of the August PSF, indicates the breadth of support to the PSF already registered by major social movements in Quebec and English Canada:

“While we have been witness to often spirited resistance in many spaces and places — the Québec student strike, the indigenous Idle No More movement, and the rallies against the Enbridge and TransCanada pipelines — there has not yet been a united Canada-wide response. What are the prospects for a pan-Canadian fightback?

“The feeling in Québec is that such a unified counterattack is essential given the scale and severity of the Harper government's attacks both on social programs (Employment Insurance) and public services (Canada Post) as well as on the right to strike in sectors under federal jurisdiction. In fact, Québec social movements, from the trade union confederations (FTQ, CSN, CSQ) to the women's organizations (Fédération des femmes du Québec), housing (FRAPRU) and students (ASSÉ), have been spearheading plans for the forum for more than two years.

“The same is true of the Indigenous communities who are seeking to broaden support for their opposition to the Tar Sands and other mining projects that are destroying their ancestral lands. It is on this basis that a dynamic Indigenous caucus has been set up bringing together activists from Idle No More, the Indigenous Environmental Network and Québec Native Women.

“This Québec-First Nations nexus is what is driving the 2014 Peoples' Forum.”

“And where does English Canada fit in all this?,” Rashi asks.

“For more than a year, support for the 2014 People's Social Forum has been growing, with involvement in planning efforts by union and community activists from several regions across Canada. There's a union caucus afoot which includes representatives from the Québec trade union confederations and delegates from cross-country unions (the Canadian Union of Public Employees, the Public Service Alliance of Canada, the Canadian Union of Postal Workers, UNIFOR) and federations outside Québec (the Ontario Federation of Labour, the Nova Scotia Federation of Labour, etc.).

“In addition, the Ontario Common Front, a provincial coalition of over a hundred community, union and antiracism groups, is supporting the Forum. Community activists are also joining the Forum's regional support groups in many cities across the country (Vancouver, Regina,Winnipeg, London,Toronto, Ottawa, Halifax).

“There is talk of organizing caravans from Vancouver and Halifax in August to bring people to the Forum in Ottawa. The aim would be to reach out to people in communities and regions outside major cities where the struggles are less well known and rally them to the call to unite against the Right.

“One of the strong points of the planning process for the pan-Canadian Forum is this convergence of social movements from Québec, the First Nations and the rest of Canada. Constant networking facilitates participation in discussions about the Forum's objectives and program….

“The gathering of forces that is the Peoples' Forum is fuelled above all by Stephen Harper and the conservative policies he champions. But the goal of the Forum goes beyond our common antipathy for the current prime minister. From the start, the target has been neoliberal and austerity policies. The 2014 People's Social Forum has adopted the slogan ‘Fighting Harper and Beyond’ coined by left activists in English Canada. Because behind the fearsome figure of Stephen Harper looms the smiling countenance of Justin Trudeau and the other party of the Canadian oligarchy: the Liberals.”

The June 6 planning meeting in Montréal is sponsored by a coalition of Quebec social movements. On May 6 they issued the following appeal to other organizations and activists inviting them to attend the meeting. I have translated the text of their appeal, below, from Presse-toi à gauche.

The Peoples’ Social Forum, to be held in Ottawa August 21-24 of this year, is expected to attract more than 10,000 participants. It will be an historic meeting: the very first time that activists and progressive organizations from Quebec, English Canada and the First Nations meet to discuss the future that we want.

Before and beyond the Ottawa Forum

How we protect our climate is already a defining theme of the Forum, and an Assembly of Social Movements is to be held on this topic. Our movements are active as never before on the issue. The First Nations are in the vanguard of many struggles against the mining and petroleum industries in Canada.

Citizens movements have generated massive opposition to each of the Canadian government’s attempts to export its oil to the South, West and now the East.

The environmental organizations targeted by this government are winning more and more support for their campaigns against climate changes in general and against the extractive industries in particular.

Scientists and their institutions, also under attack, continue to denounce the government’s climate obscurantism, and are likewise demanding action.

These conditions create an unprecedented dynamic and we believe that together we can accomplish much more to curb climate change. The responsible Canadian policies and industries must be changed now.

Cuts at Environment Canada, omnibus laws affecting hundreds of thousands of lakes and rivers in order to allow the passage of pipelines, attacks on environmental groups, subsidies to the oil and gas industry, free-trade agreements focused around fossil fuels, etc. — these are parts of an overall general strategy to convert all natural resources, and especially the Alberta tar sands, into capital, down to the last drop and with no considerations of the negative effects on the climate or citizens.

The exploitation of the tar sands, where production is to triple in the years to come, is already the fastest growing source in Canada of the greenhouse gas emissions responsible for climate change. The First Nations living downstream from the tar sands, one of the largest industrial projects on Earth, are the first to be confronted with major impacts including the significantly higher rates of rare cancers. The tar sands are a source of serious water and air pollution, as well as destroying vast stretches of boreal forest.

While the Canadian government pursues its pro-oil strategy, Canadians suffer major negative effects of climate change and are now more responsible than ever before for the global effects of this change. Canadian policies are hurting locally and globally. What kind of nation can be built on the foolhardy expansion of the tar sands?

We know that we must work together, but we do not know how!

We know that we are already working on common issues, and that together we can mobilize more people and have a greater impact.

We know that we have to offer strong social, citizens’ and aboriginal opposition to this government and to all later governments that want to pursue the same policies.

We know that the alliance between the movements in the West and East of the country would be unprecedented and that it could destabilize the government and the oil and gas industry.

We know that we will be stronger!

Objectives of the Assembly:

The Assembly of the social movements on the climate wants to curb climate changes. We know that policies and actions of our government and the industry are largely responsible for climate changes and we want to act together on these issues. To attain this objective, the Assembly should adopt and follow a common action plan involving all the actors in the 2014 Peoples’ Social Forum.

The Assembly of the social movements on the climate should not be a two-hour meeting. We want to build an “Assembly” that will endure in time and will help us continue to work together on these fundamental issues in the years to come, independently of who will govern this country after 2015. We propose, therefore, to begin the process prior to the August PSF, so that we can come to Ottawa with a more advanced action plan.

The Assembly must be inclusive of all interested parties active on the question. The First Nations, the environmental organizations, the climate and anti-fossil fuels activists, unions and social movements will be invited to participate.

Any organization proposing an activity for the Peoples’ Social Forum on the “climate” theme will be invited to join the Assembly on climate changes. Alternatives and the Council of Canadians propose to facilitate an initial meeting that will launch the Assembly. The process will be inclusive, based on the PSF Charter, and all interested groups are also invited to participate in the preparation of this initial meeting.

The meeting will be held on June 6, since the participants in the Peoples’ March for Mother Earth — a 700 km march from Cacouna to Kanesatake — will be reaching Montréal the night before. On June 7, the marchers will cross the city of Montréal en route toward their final destination, and you will be able to join them.