Spain’s newest political party is also its most popular. With roots in the 2011 indignados movement (also called the 15-M movement), Podemos emerged in January with a petition launched by a few dozen intellectuals. In May’s European Parliament elections, just months after its formation, the leftist party captured 8 percent of the vote. It is now the second largest political party in Spain by membership and the largest in the polls. Even the Financial Times admits, “the new party appears to be on course to shatter Spain’s established two-party system.”

At a meeting held early this year in Valladolid, Spain, Podemos General Secretary Pablo Iglesias offered his thoughts on how the Left can win. Below is an excerpt from that talk. The transcript and translation were prepared for Jacobin by Enrique Diaz-Alvarez.

[For articles on Podemos and left politics in the Spanish state, see this collection in Links, international journal of socialist renewal: http://links.org.au/taxonomy/term/845. For a video of Iglesias’ comment, click on the hyperlink “offered,” above.] 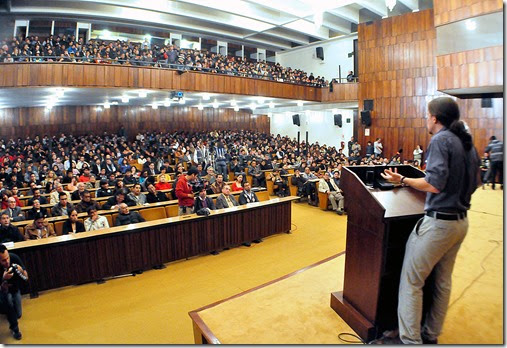 Pablo Iglesias visited Bolivia in September during that country’s national election. Among other events, he spoke to a mass meeting hosted by Vice-President Álvaro García Linera in the amphitheatre of Bolivia’s Central Bank. For an account, see “We are here to learn from Bolivia” (in Spanish).

The Left Can Win

I know very well that the key to understanding the history of the past five hundred years is the emergence of specific social categories, called “classes.” And I am going to tell you an anecdote. When the 15-M movement first started, at the Puerta del Sol, some students from my department, the department of political science, very political students — they had read Marx, they had read Lenin — they participated for the first time in their lives with normal people.

[I’d reply to them], “Can’t you see that the problem is you? That politics has nothing to do with being right, that politics is about succeeding?” One can have the best analysis, understand the keys to political developments since the sixteenth century, know that historical materialism is the key to understanding social processes. And what are you going to do — scream that to people? “You are workers and you don’t even know it!”

The enemy wants nothing more than to laugh at you. You can wear a t-shirt with the hammer and sickle. You can even carry a huge flag, and then go back home with your flag, all while the enemy laughs at you. Because the people, the workers, they prefer the enemy to you. They believe him. They understand him when he speaks. They don’t understand you. And maybe you are right! Maybe you can ask your children to write that on your tombstone: “He was always right — but no one ever knew.”

When you study successful transformational movements, you see that the key to success is to establish a certain identity between your analysis and what the majority feels. And that is very hard. It implies riding out contradictions.

Do you think I have any ideological problem with a forty-eight hour or a seventy-two-hour wildcat strike? Not in the least! The problem is that organizing a strike has nothing to do with how badly you or I want to do it. It has to do with union strength, and both you and I are insignificant there.

You and I may wish that earth were a paradise for all mankind. We can wish whatever we want, and put it on a t-shirt. But politics is about strength, it is not about wishes or what we say in assemblies. In this country there are only two unions with the ability to organize a general strike: the CCOO and the UGT. Do I like that? No. But it is what it is, and organizing a general strike is very difficult.

I’ve manned the picket lines in front of the bus depots in Madrid. The people there, at dawn, you know where they had to go? To work. They were no scabs. But they would be fired from their jobs, because at their jobs there were no unions to defend them. Because the workers who can defend themselves, like those in the shipyards, in the mines, they have strong unions. But the kids that work as telemarketers, or at pizza joints, or the girls working in retail, they cannot defend themselves.

Politics is not what you or I would like it to be. It is what it is, and it is terrible. Terrible. And that’s why we must talk about popular unity, and be humble. Sometimes you have to talk to people who don’t like your language, with whom the concepts you use to explain don’t resonate. What does that tell us? That we have been defeated for many years. Losing all the time implies just that: that people’s “common sense” is different [from what we think is right]. But that is not news. Revolutionaries have always known that. The key is to succeed in making “common sense” go in a direction of change.

César Rendueles, a very smart guy, says most people are against capitalism, and they don’t know it. Most people defend feminism and they haven’t read Judith Butler or Simone de Beauvoir. Whenever you see a father doing the dishes or playing with his daughter, or a grandfather teaching his grandkid to share his toys, there is more social transformation in that than in all the red flags you can bring to a demonstration. And if we fail to understand that those things can serve as unifiers, they will keep laughing at us.

That’s how the enemy wants us. He want us small, speaking a language no one understands, in a minority, hiding behind our traditional symbols. He is delighted with that, because he knows that as long as we are like that, we are not dangerous.

We can have a really radical discourse, say we want to do a general wildcat strike, talk about the people in arms, brandish symbols, carry portraits of the great revolutionaries to our demonstrations — they are delighted with that! They laugh at us. However, when you gather together hundreds, thousands of people, when you start convincing the majority, even those who voted for the enemy — that’s when they start to be afraid. And that is called “politics.” That is what we need to learn.

There was a fellow here who talked about the Soviets in 1905. There was that bald guy – a genius. He understood the concrete analysis of a concrete situation. In a time of war, in 1917, when the regime had crashed in Russia, he said a very simple thing to the Russians, whether they were soldiers, peasants, or workers. He said: “bread and peace.”

And when he said “Bread and Peace,” which is what everyone wanted — for the war to be over and to have enough to eat — many Russians who had no idea whether they were “left” or “right,” but did know that they were hungry, they said: “The bald guy is right.” And the bald guy did very well. He didn’t talk to the Russians about “dialectical materialism,” he talked to them about “bread and peace.” And that is one of the main lessons of the twentieth century.

Trying to transform society by mimicking history, mimicking symbols, is ridiculous. There is no repeating other countries’ experiences, past historical events. The key is to analyze processes, history’s lessons. And to understand that at each point in time, “bread and peace,” if it is not connected to what people think and feel, is just repeating, as farce, a tragic victory from the past.