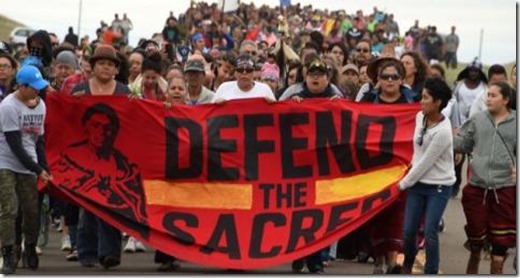 The pipeline is scheduled to go underneath Oahe Lake, near the Standing Rock Sioux reservation. The battle between Native Americans and their supporters on one side, and the financial capitalists behind the pipeline as well as the federal and North Dakota state governments on the other, has become an explosive national issue. (It is ironic that “Dakota” is the name of a Native American tribe.)

Opponents of the pipeline are preparing for a long struggle, which unites the issues of global warming due to fossil fuels, the dangers of polluting ground water and the Missouri River, the rights of Native Americans, and other issues, including the corruption of “eminent domain” to allow capitalist plunderers to seize anyone’s land for private profit.

The $3.8 billion Dakota Access pipeline would send 500,000 barrels of shale oil per day from the northwest side of North Dakota 1,200 miles to Illinois, where it would be further piped to refineries on the Gulf of Mexico. Shale oil is extracted by fracking, which uses a great deal of water that is poisoned by added chemicals and seeps into ground water. Most of the refined products are to be sent to Asia, and would add to greenhouse gases when consumed.

Energy Transfers Partners, headed by billionaire Kelcy Warren, is doing the construction. Dakota Access is a joint venture of ETP and Sunoco Logistics. Enbridge, Inc., which has many pipelines in Canada and the U.S., and Marathon Oil have bought into the venture.

Against these powerful interests are ordinary workers, farmers, environment activists spearheaded by indigenous peoples (Native Americans in the U.S. and First Nations in Canada). Throughout the Americas -- North, Central and South – indigenous peoples have often been in the lead in defending the air, water, and land from the ravages of capitalism’s rapacious drive to “accumulate, accumulate” in Marx’ words.

The resistance to the Dakota Access pipeline took a major step forward on April 1, when the Standing Rock Sioux Tribe set up an ongoing protest camp near the Missouri River, called Sacred Stone, while snow was still on the ground. Their immediate issues with the pipeline are that in going under the river any future oil leak would threaten their drinking water, and that construction of the pipeline would destroy their sacred burial grounds.

They also cite that any leak would pollute the Missouri, the longest river in the U.S., which unites with the Mississippi, affecting people all the way to the Gulf. And they point to the threat of global warming to the peoples of the whole planet.

Sacred Stone started out small. Then other tribes in the U.S. and Canada heard about it, took up the issue as their own, and many came to the encampment. Some 180 tribes have joined the Sioux in the fight. The encampment swelled to over 1,000 when in July the U.S. Army Corps of Engineers approved the pipeline disregarding the protests. Then people in the growing encampment put their bodies and horses on the line to physically block construction. Twenty-eight were arrested by mid-August.

Among those coming to Sacred Stone was Dennis Banks, a leader of the American Indian Movement during the radicalization of the 1960s-1970s. In 1973 AIM was involved in an armed confrontation with the U.S. government and seized the town of Wounded Knee, on the Pine Ridge Indian Reservation in South Dakota. Wounded Knee was the site of a massacre of Native Americans in 1890.

“What’s happening [at Standing Rock] is equally important [as wounded Knee],” Banks said on Democracy Now! “We are part mountain. We are part ocean. We are part river. We are part flower and grass and tree. All of this, we are part of all of it, so that when they threaten the environment, they’re threatening you. You have to be in that mindset. That’s who you are. That’s who we are. And our culture, our heritage is what has made us warriors.”

David Archambault, chairperson of the Standing Rock Sioux, said, “All the things that have happened to tribal nations [across the U.S.] have been unjust and unfair…all too often we share similar concerns, similar wrongdoings to us, so we are uniting, and we are standing up, and we’re saying ‘No more!’ “

There was a lull in construction of the pipeline while court cases were heard. On September 2 the Standing rock Sioux filed a lawsuit to stop the destruction of the sacred burial ground by Dakota Access. The next day, not waiting for the lawsuit to be judged, the company began to bulldoze the site.

When the protesters swarmed in to block the assault, private security guards attacked them with dogs and pepper spray. Democracy Now! was present and videoed the attack and melee, including one dog with a bloody mouth from biting a protestor. Also present was Green Party presidential candidate Jill Stein and her running mate Ajumu Baraka. Stein was shown spray painting “I approve this message” on the blade of a bulldozer. The video was reproduced around the world.

A few days later, the North Dakota Attorney General issued arrest warrants for Amy Goodman of Democracy Now! and for Stein and Bartaka for “criminal trespass.” Then on September 9 a racist judge ruled against the Sioux lawsuit. Embarrassed in the face of what has become a national scandal, the White House immediately ordered the temporary halt to construction under the river, and then a federal court extended the halt to 20 miles on either side.

The temporary ruling is to allow the Army Corps of Engineers to reconsider its approval of the pipeline going under the Missouri River, and for a reconsideration of the destruction of the sacred burial ground. Tribes are supposed to have input.

Confrontations have continued at other sites of the pipeline’s ongoing construction in North Dakota, with protestors locking arms and chaining themselves to heavy equipment, with more arrests.

The pipeline is also facing resistance downstream from North Dakota, in Iowa, by ranchers, farmers and homeowners, where about 30 people were arrested in an effort to block construction. A lawsuit is being brought by 15 farmers to stop Dakota Access from seizing their land under what is called “eminent domain.”

Eminent domain was originally meant to allow federal, state and local governments to take over land for public projects like roads and highways. In 2005 the robed reactionaries of the Supreme Court ruled that eminent domain could be used by companies to seize land for private enterprises. This ruling is what Dakota Access is using to seize the land of Iowan landowners for the pipeline.

On September 13, rallies in support of the struggle in North Dakota were held in dozens of cities across the country. People are continuing to go to Sacred Rock, including a caravan of Palestinian youth. Palestinians, like the Native Americans, have been victims of genocide and displacement by European settlers from their land.

Money and supplies are being collected to aid the Sacred Rock encampment. As this is shaping up to be a long battle, the encampment will face the brutal North Dakota winter. Warm clothing is especially needed.

On September 29 David Archambault took the case to the United Nations Human Rights Council in Geneva. “While we have gone to court in the United States, our courts have failed to protect our sovereign rights, our sacred places and our water” he said. “We call upon the Human Rights Council and all members, all member states, to condemn the destruction of our sacred places and to support our nation’s efforts to ensure our sovereign rights are respected. We ask you to call upon all parties to stop the construction of the Dakota Access pipeline and to protect the environment, our nation’s future, our culture and our way of life.”