A Québécois view of Canada’s 150th

The following article by André Binette, a prominent constitutional lawyer in Quebec, was first published in L’Aut’journal. The translation and notes are mine. – Richard Fidler 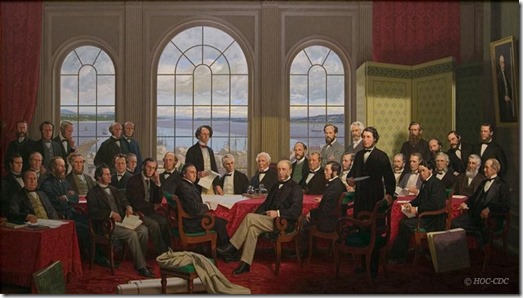 Each sovereign state can choose the date of its national holiday. Generally, this date recalls the accession to independence. The United States, for example, chose to emphasize each year their unilateral declaration of independence of July 4, 1776. They preferred this date to the date of the Treaty of Paris, 1783, which ended the revolutionary war they had won thanks to France’s decisive support. Their national holiday commemorates a founding act.

In France, where the origin of independence is lost in the mists of time, they remember the 14th of July, the fall of the Bastille, as the passage from monarchy to the Republic, the founding act of modern France. Unlike some other countries, the United Kingdom celebrates the birth of its sovereign as its national holiday; it is celebrated on the second Saturday in June. In Canada, they celebrate “the Queen’s birthday” in late May. In Quebec, the Parti Québécois government of Bernard Landry transformed the Queen’s birthday into its opposite, the Patriots’ Day, after the Patriotes who sought to establish the independence of Lower Canada, Quebec’s ancestor.

So Canada celebrates two national holidays: the United Kingdom’s and the one called Canada Day, referring to “Confederation,” (which was a confederation in name only), on July 1.[1] Neither has any relation to its independence. Canada does not celebrate the date of its accession to independence, which legally occurred on December 11, 1931 through the adoption of a British law called the Statute of Westminster.[2] Why?

There is more than one reason for this. First, the date when Canada achieved independence is in reality uncertain. In its Patriation Reference in 1981,[3] the Supreme Court was unable to situate it precisely, which in itself is an anomaly. At most it indicated that it had occurred in events between 1919 and 1931. This effective sovereignty was allegedly won on the battlefields of the First World War, in particular at the battle of Vimy Ridge — one of uncertain military importance but of great importance in the construction of Canadian identity, and for which its 100th anniversary has just been celebrated. This victory led to the separate signature to the Treaty of Versailles of His Majesty King George V on behalf of Canada, which conferred on Canada an international juridical personality, one of the fundamental attributes of sovereignty.

It should be noted that during the centennial ceremonies at Vimy on April 9 the Canadian prime minister stated: “It is here where Canada was born.” This statement teaches us two things. First, and this is an irony of history, Canada was born in France. Second, Canada did not exist in 1867. It was born, according to Mr. Trudeau, exactly a half-century later.

Indeed, it should be recalled that British troops were still occupying the Quebec Citadel in 1867. The Canadian armed forces did not yet exist. Canada had no international relations other than relations within the British Empire. There was no Canadian ambassador abroad, and Canada could sign no treaty because its international relations, including with the United States, were conducted in London. Canadian citizenship did not appear until 1947.

The only provision in the British North America Act, 1867 that had anything to do with international affairs was section 132, which granted the Parliament and Government of Canada “all Powers necessary or proper for performing the Obligations of Canada or of any Province thereof, as Part of the British Empire, towards Foreign Countries, arising under Treaties between the Empire and such Foreign Countries.”[4] Moreover, the same Act provided that all federal laws could be disallowed [overruled] by London. The 1867 Act failed to respect the principle of effectiveness of core state functions, a necessary condition of independence.

Why, then, do they want to celebrate 150 years of colonial autonomy? It can only be because in 1867 they thought they had found the final solution to an event that had occurred thirty years earlier and had been a political earthquake. This was, of course, the rebellion of the Patriotes of Lower Canada.[5] A parallel revolt occurred in Upper Canada, but it concerned only the distribution of powers among Anglophones, namely the British governor and the local élite. That was remedied by the advent of responsible government which turned power over to the elected representatives of the population. In Lower Canada, in contrast, responsible government aggravated the fundamental problem which was the co-existence of two nations — the more vigorous one, demographically, being the French-Canadian nation.

The Act of Union in 1840, which merged Upper and Lower Canada, had been designed to dilute the power of the Francophone majority of Lower Canada at a time when responsible government was becoming inevitable. However, the Act of Union was a failure since the political and national realities were obvious: in effect, there were two co-premiers and two attorneys general in United Canada; two parliamentary majorities were required if laws were to be adopted. The fait francophone continued to weigh heavily in the functioning of the Union, too heavily in the eyes of certain Anglophone politicians.

The solution was colonial federalism, that is, Quebec’s imprisonment in a federal framework in which it was to become increasingly a minority. This imprisonment, which was an attempt at more definitive appropriation and neutralization of Québécois identity, is the precondition to the existence of Canada. This existential condition found its logical follow-up in the negation of the Quebec nation in the constitutional renewal of 1982. Canada was built on the weakening of Quebec. On July 1st each year the Canadian nation celebrates its domination over the Quebec nation. The choice of a founding act that is to be collectively celebrated is never innocent and is always revealing.

[1] July 1, 1867 was the date on which the British North America Act, an act of the British Parliament, came into force. It consolidated four colonies — Nova Scotia, New Brunswick, Quebec (formerly Lower Canada) and Ontario (formerly Upper Canada) — into the Dominion of Canada, lacking formal popular consent and hence not a true federation of sovereign powers.

[2] One could add that Canadian criminal law appeals to the British House of Lords were not abolished until 1933 and all other appeals in 1949.

[4] Capitalization in the original. The Constitution Act, 1982, like its predecessor the British North America Act, was first adopted by the British Parliament in an English version (the UK’s Canada Act) and has never been adopted in an official French version, notwithstanding section 55 which provides: “A French version of the portions of the Constitution of Canada referred to in the schedule shall be prepared by the Minister of Justice of Canada as expeditiously as possible....”

[5] In 1837-38 the Patriotes of Lower Canada waged an armed struggle against British rule that was ultimately defeated. The revolt followed British rejection of the 92 resolutions drafted by Louis-Joseph Papineau and other members of the Parti Patriote in 1834 calling for political reforms in the colony. They were largely incorporated in a Declaration of Independence of the Republic of Lower Canada drafted in 1838 by rebel leader Robert Nelson.