The Left and Venezuela

The media keep silent about the violence of the Venezuelan opposition and the prevailing repression by the right-wing governments of Latin America. The Right’s strategy of an institutional coup faces serious limits, but the Left must address this new threat, supporting anti-imperialist decisions and making a distinction between the capitalist boycott and the government’s ineffectiveness.

Adhering to social-democratic standards, the post-progressive “critical left” objects to Chavismo, dismissing the danger of a coup, and mistakenly identifying authoritarianism as the main danger. The dogmatists overlook the main enemy and converge with the conservatives or slip toward passive neutrality.

The Right only wants elections it is sure it will win. In these very adverse conditions, the Constituent Assembly re-opens opportunities and points to a re-encounter with radical intellectual thought. 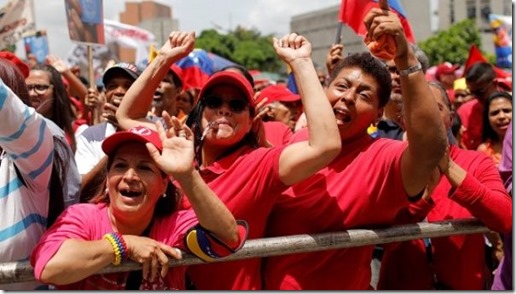 Supporters of President Nicolás Maduro participate in a rally in Caracas in support of the national Constituent Assembly.

[1] Economist, researcher with Argentina’s National Council of Scientific and Technical Research (CONICET), professor at the University of Buenos Aires and a member of the Economists of the Left (EDI). His web page, where this article first appeared, is at www.lahaine.org/katz.