The fight for independence in Catalonia: What lessons for Quebec? 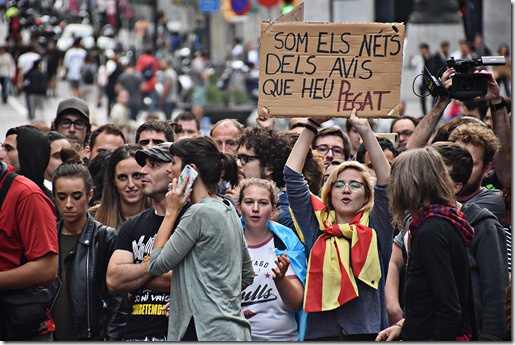 Following the October 1 referendum in Catalonia — held in the face of massive repression resulting in hundreds of injured — the people shut down production and massed in cities and towns across the autonomous state on October 3 to protest the Spanish government’s attempt to deny them the elementary democratic right to vote on their constitutional and political future.

Some leaders of the independence movement have been charged by the federal court with “sedition,” as has the head of the Catalan police (the Mossos d’Esquadra) who is accused of “passivity” in the face of a September 20 demonstration.

The events in Catalonia have naturally attracted much interest in Quebec, and some dozens of Québécois have made their way to Barcelona and environs in recent days. They include leaders of the pro-sovereignty parties in Quebec, among them Manon Massé, a spokesperson for the left independentist party Québec solidaire.

In an exceptional gesture, the Quebec National Assembly voted unanimously (113 to 0) on October 4 to “deplore the authoritarian attitude of the Spanish government, which has led to acts of violence during the referendum on the independence of Catalonia,” adding that it “deplores the number of injured.” The Assembly called for “political and democratic dialogue between Catalonia and Spain in order to resolve peacefully and in a consensual way the differences that separate them, in respect of democracy and law, and with international mediation if the parties so consent, to lead the parties to a negotiated solution.”

The motion was presented by Parti québécois leader Jean-François Lisée on behalf of Premier Philippe Couillard and the other party leaders, including Manon Massé of QS, who had just returned from Barcelona. The resolution was a clear departure from the refusal of Couillard up to then (and even today by the Trudeau government) to criticize the Spanish government for its handling of the Catalonian crisis.

The motion, along with considerable critical commentary in the media, is no doubt just the beginning of public discussion in Quebec over what the events in Catalonia mean for Quebec, and especially the independence movement.

The following is an initial contribution by André Frappier, an editor of Presse-toi à gauche and Canadian Dimension. A former president of the Montréal postal workers union (CUPW), he is also a member of the National Coordination Committee of Québec solidaire, although he writes here in a personal capacity. André informs me that he will be in Catalonia during the next week to observe firsthand the important events. I have translated this from Presse-toi à gauche. 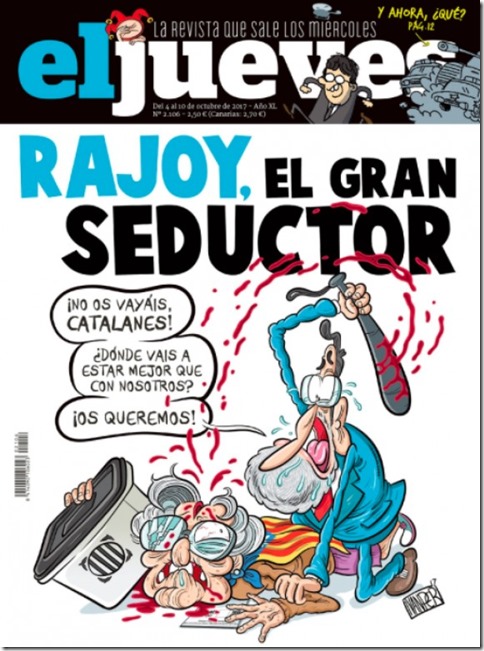 Rajoy, the Great Seducer: 'Don't go, Catalans! Where are you going to be better off than with us? We love you!'

The struggle for independence in Catalonia: What lessons for Quebec?

The struggle of the Catalan people for their right to self-determination and ultimately for their independence is certainly not commensurate with the struggles Quebec has experienced in its recent past, if we consider the history of the 1980 and 1995 referendums. Spain’s history and constitution, its Francoist legacy, in a context of a European Union that is managing the anti-popular austerity offensive, tend to give a form overtly more inflexible to the Spanish government’s reaction in opposition to the Catalan nation. But while that struggle is unfolding in a different context, it is important to examine the situation and to draw some lessons for the struggle that we are carrying on in Quebec.

Revisiting the past: differences and similarities with Catalonia

In the 1995 referendum, the Canadian government chose to bet on its defeat and had allied with the NO forces in Quebec, as it had done in 1980. In doing so, however, it did grant some validity to Quebec’s referendum exercise, which represented a certain risk. As it happened, the NO obtained only 50.58% of the votes in 1995, a significant decline in comparison with the 1980 referendum when it had obtained 59.56%.

The Liberal government headed by Jean Chrétien had spared nothing, however. This battle had to be won at any cost. So it breached the funding rules imposed by Quebec legislation on the contending sides by diverting no less than $332 million from Canadian government coffers toward some Quebec advertising agencies — what became known as the sponsorship scandal. Not to mention the organization of the love-in of the federalists who came to demonstrate their “love for Quebec.” The cost of that demonstration was assessed at close to $4.3 million, it too contravening Quebec’s referendum law which limited the respective camps to spending $5 million to promote their ideas during the campaign. Among the thousands of persons who besieged downtown Montréal there were New Brunswickers arriving in buses chartered by Irving Oil, students coming from Vancouver thanks to a 90% discount of Air Canada, and employees of the municipality of Ottawa-Carleton who had been given a paid day off.

The Liberal government therefore had to draw some lessons from this risqué adventure in which it had lost a lot of credibility and the Yes side had lost by very little. In 1997 Stéphane Dion was given the mandate by the Chrétien government to take over this question and to determine the action to be taken should another referendum end up winning. He went first to the Supreme Court and then tabled a bill on referendum Clarity that was adopted in June 2000.

This new law states in its “whereases” that the Supreme Court of Canada has held that neither the Quebec National Assembly nor the government of Quebec has the right , either in international law or under the Constitution of Canada, to proceed unilaterally to the secession of Quebec from Canada.

This law decrees that the people of Quebec do not have the right to take the decision to separate on their own. The Quebec government would have the duty to negotiate. But even then only if the federal government recognized the validity of the vote. The terms of negotiation, and the conditions in which it would be exercised, are therefore established by the federal government, which becomes judge and party.

That considerably altered the situation and strengthened the federal state, which has now armed itself with safeguards against independence. As the Gomery commission demonstrated, the chances were already unequal when confronted by cheaters. And we now know that the fight for sovereignty will necessitate a large and favourable relationship of forces. In that respect, we already share somewhat the Catalan situation.

Finally, let us remember that the Canadian constitution, repatriated [from Britain] in 1982, has never received the necessary consensus since Quebec has never accepted it.

Will the Canadian state confront Quebec independence in a way that differs from that of the Spanish state today?

This is by no means certain. Geographically, Quebec is not located at the periphery of the Canadian state. Quebec’s secession would cut Canada in two, isolating the Maritime provinces from Ontario and the western provinces. It would also constitute an enclave in regard to Seaway transportation, which must pass through Quebec on its way inland and outbound. Quebec would now be entitled to decide what can cross its territory, and if it wishes to prohibit any form of pipeline. It would also have full control over rail and highway transportation.

That is enough to represent a major threat, especially for a state that runs on the extraction and export of petroleum, with Quebec as a decisive route. But would the people of a Quebec that has become independent choose that avenue? Judging by the sustained mobilization in the different regions of Quebec for protection of our environment, including the some 230 municipalities that support the struggle in Ristigouche and have adopted similar protective by-laws, and given the awareness of the need for an energy transition toward sustainable sources it is almost unthinkable that a struggle for Quebec sovereignty would not entail a struggle over the appropriation and control of our environment. What is the use of independence if it not to free ourselves as well from our dependency on the multinational corporations?

The other aspect is political. Independence, it is clear, cannot be achieved in a cold way. It will be the culmination of a struggle that is both social and parliamentary, the construction of a relationship of force to flush out the profiteers and the corrupt who hoard our collective resources and monopolize the profits. It will be the culmination of building a force that can accomplish our sovereign choice of society through the constituent assembly. The working class in the rest of Canada will be able to see in this a hope that will revitalize its own struggles, provided that it escapes the subjection to its own bourgeoisie and therefore Canadian nationalism.

And that is the other major threat for the Canadian federal state. The possibility of a truncated state, with a Quebec in ferment, will of course represent a much more dangerous situation for the Canadian ruling class. The support of the working class in the rest of Canada will then be a decisive element, as it now is in Spain for the Catalan people.

[Thanks to Dick Nichols, Barcelona correspondent of Green Left Weekly, for photo and cartoon. Dick is reporting daily on the events.]