Catalonia: The independence movement resists, but without clarifying its strategy

Breakdown of the number of seats (escaños) in the Parlement won by the respective parties under Catalonia’s proportional representation electoral system.

Marti Caussa is an editor of Viento Sur. This article was originally published in the Catalan language. I have translated it from the Spanish version in Viento Sur. And I follow it below with some additional comments.

The December 21 election (21-D) reconfirmed the absolute majority of pro-independence members in the Catalan Parlement. It marked the political defeat of article 155, although that article and its consequences are still in force. On the other hand, the “unionist” bloc, favouring the “union” under the Spanish state and defending the latter’s implementation of article 155, emerged stronger and more aggressive. Ciudadanos (C’s) obtained the largest number of votes and deputies, and furthered its hegemony within this bloc.

The pro-independence majority bloc, winning the most votes and seats, legitimates the struggle for the Catalan Republic and the result of the October 1 referendum. However, the lack of strategic clarity continues. The October 27 unilateral declaration of independence revealed that the strategy of the pro-independence majority was inapplicable. But no steps were taken in practice to re-examine its orientation. And some of the proposals advanced indicate a disquieting direction.

The independentist majority in the previous Parlament (JuntsxCat, led by Carles Puidgemont; ERC, led by Oriol Junqueras; and the Popular Unity Candidacy, or CUP) was re-elected, but with a loss of two seats (70 vs. 72). Its percentage total remained virtually the same (47.49% vs. 47.74% in 2015) albeit with a much higher participation by voters (close to 82% of the eligible electorate). And the number of votes on December 21 was a slight increase from the number registered in the October 1 referendum and in the previous “plebiscitary” election [called by then President Artur Mas] on September 27, 2014 (respectively 2,063,361 vs. 2,044,038 and 1,897,274), but in a context in which a further 245,000 valid votes were cast.

The relation of forces within the independentist bloc was appreciably altered, but not fundamentally. Puigdemont managed to retain his leadership thanks to a greater autonomy vis-a- vis the PDeCat (Catalan European Democratic Party). The ERC (Catalan Republican Left) almost equalled the results of JuntsxCat, but did not manage to exceed them, as most of the opinion polls had predicted, which would have meant that the moderate left would have won a majority within the bloc and with Oriol Junqueras as the new President.

But the major change was the setback to the anticapitalist pro-independence party, the CUP, which lost more than 140,000 votes and 6 of its previous 10 deputies. This means it will play a much less decisive role in the new Parlement than it did previously, when it was able to influence the policy of the independentist bloc and the election of its President.

Catalunya en Comú-Podem [a coalition of five formations: Catalunya en Comú, Podem, Barcelona en Comú, Iniciativa per Catalunya Verds and Esquerra Unida i Alternativa], which is to continue characterizing itself as a left-wing sovereigntist force [defending Catalonia’s right to self-determination but not independence] notwithstanding its electoral campaign, lost close to 43,000 votes and 3 deputies. It obtained 323,695 votes and 8 deputies, less than its predecessor coalition Catalunya Sí Que es Pot did in 2015 (366,494 votes and 11 deputies) and ICV/EUiA [Initiativa per Catalunya Verds – Esquerra Unida i Alternativa] did in 2012 (359,705 votes and 13 deputies).

The unionist and pro-article 155 parties were unable to prevent the victory of the independentist movement. However, they did come very close to their previous results in votes (174,000 less) and percentage (4% less) but with a greater difference in seats (13). This means that Catalonia is divided into two major blocs: an independentist one, with an influence shared between the neoliberal centre and the moderate left; and a “unionist” one, defender of the anti-democratic article 155 and hegemonized by the neoliberal right. The left that fights for a clean break is a tiny minority within the pro-independence bloc and the weakened Catalunya en Comú-Podem cannot be included in either of the two blocs.

C’s is the largely hegemonic force in the unionist bloc and a supporter of article 155: it increased its votes by 367,000 and won 12 more deputies than it had in 2015. Its results were particularly strong in Barcelonés [the administrative region in which Barcelona is the centre], Vallés [the region with Caldas de Montbui as the historic capital], and Tarragonés [the province of Terragon]. C’s now dominate in what was previously the red belt of the PSC [Partit dels Socialistes de Catalunya, the Catalan counterpart of Spain’s social-democratic PSOE] and the ICV.

A very large share of C’s increased vote comes from the collapse of the PP [Partido Popular, the party of Spanish prime minister Mariano Rajoy], which lost 164,000 votes and 8 deputies. But probably most important is the fact that C’s managed to mobilize many who traditionally abstained from voting.

The defeat of the PP, the party that obtained the least votes and the least seats, is certainly good news and Rajoy will probably pay the price, given that he was unable to defeat the independentist bloc and destroyed his party in Catalonia. Moreover, he reinforced the party that is contesting his hegemony throughout the Spanish state.

Miquel Iceta [first secretary of the Catalan Socialist party] placed in third position on the PSC list Ramón Espadaler [former secretary of the Unió Democràtica de Catalunya, a Christian party, and now with the Convergència i Unió-CiU, a centrist party] together with some people from the Societat Civil Catalana or the Tercera Via [Third Way]. He tried to present himself as the supporter of an acceptable article 155. Thus he said he would ask for amnesty for the political prisoners. But he drew back when the unionist bloc turned on him. The results of all these maneuvers were modest; he increased his score by 80,000 votes and one deputy.

In short, the December 21 results should allow the selection of a pro-independence government, with Puigdemont, who headed the independentist list with the most votes, as President. The ERC has already explained that this was their proposal. But it remains to be seen how the difficulties resulting from Puigdemont’s exile and the charges issued by the Supreme Court can be overcome. The court continues to expand the list of the people being prosecuted for rebellion, with the addition now of Artur Mas, Marta Pascal, Marta Rovira, Anna Gabriel and Neus Lloveras.

In fact, the most urgent task after the elections continues to be the effective withdrawal of article 155 and of all its consequences, in particular the freeing of the political prisoners, the return of the exiles and the staying of the trials. The yellow ties campaign must be boosted anew.

Secondly, we must specify how to advance toward the conquest of the independent Catalan Republic. The December 21 elections have once again highlighted the principal problem: how to go far beyond the two million votes, how to increase the social support for the republic, particularly among the towns and cities of the regions of Barcelona, the two Vallés, Tarragon, etc. The election campaign did not help to respond to this question and instead sowed some major doubts about the validity of the unilateral actions, as I explained in a previous article.

The discussion of what has failed and what must be rectified in the strategy of the majority separatist current is still pending. But it is more needed than ever if we are to avoid getting ahead of ourselves through improvisation or unjustified retreats.

Some implications for the Catalan left

The breakdown of the election result in Barcelona, the Catalan metropolis, illustrates the challenge facing the progressive pro-independence and pro-sovereignty forces. 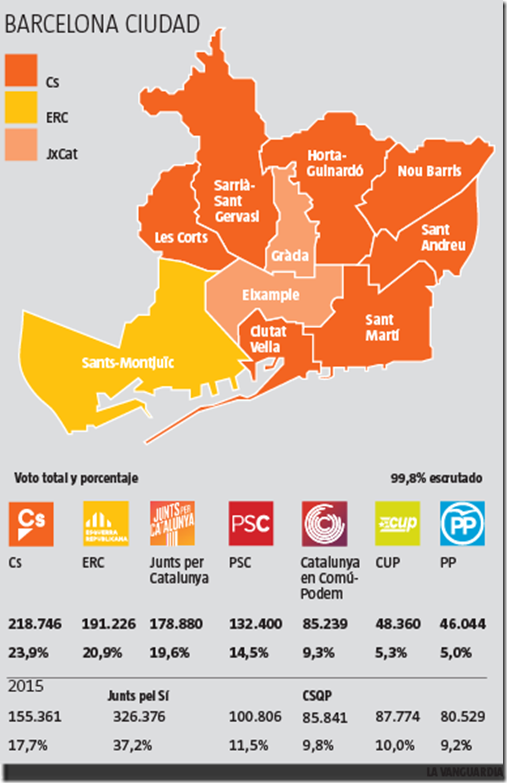 The right-wing neoliberal and anti-independence Ciutadans (Citizens, or C’s) emerged on December 21 as the strongest party in the city, as it did in the surrounding area. This is the proletarian heart of Catalonia, with a very large population of immigrants from other parts of Spain (especially Andalucía, a much poorer region in the South) and from abroad, largely from north Africa and the eastern Mediterranean.

In Catalonia itself, native Catalans are now a minority, just under 50% of the total population. To be successful, the campaign for an independent Catalan Republic must win the support of many non-Catalan workers, especially in Barcelona. And this requires that the question of independence must be built around a comprehensive program of opposition to capitalist austerity and the prospect of forming a progressive government that can work together with Catalonia’s powerful grassroots social movements to strengthen working-class and popular organization, win major social reforms, and make serious inroads on capitalist property and prerogatives.

This challenge centres on the party that municipally is dominant in Barcelona, the Commons (Barcelona en Comú), headed by the city’s mayor Ada Colau, a former social housing rights activist. Her administration is known for its progressive policies and openness to immigration and immigrant rights. It has supported greater autonomy (“sovereignty”) for Catalonia, while not itself supporting independence, and it defended the Catalan government’s democratic right to hold the October 1 referendum. However, as Marti Caussa mentions, its attempt to build a pan-Catalan political force in alliance with the Catalan counterpart of Spain’s left-wing Podemos made no advance on December 21, isolated as it was in the polarization between the pro- and anti-independence blocs.

Anticapitalist militant Esther Vivas noted in her analysis of the Barcelona results:

“The Commons result must be related to a more general dynamic of bad news for the left forces. Two right-wing parties, Ciutadans and Junts per Catalunya, received the most votes. The ERC came second to Puigdemont and the CUP suffered a serious setback. The double defeat of the Commons and the CUP will reduce the alternative voices. This fact must be taken into account. Although these two forces do not relate to each other, they are the only ones that are situated outside of orthodox economic policies.”

As Vivas indicates, the CUP faces a challenge, too. In my opinion, it would be well advised to give further thought to how it can differentiate itself from the pro-capitalist independentist parties and build its links with the popular movements around a clear anticapitalist program that addresses the social needs and demands of the population that is not native Catalan.

That message may have been diluted somewhat by compromises imposed by the CUP’s parliamentary support of the Puigdemont government, although the party was not in the government. This support was conditioned by the government’s commitment to organize and hold a referendum on Catalan independence.

For example, earlier this year the CUP made a deal with Puigdemont and the ERC to give them sufficient votes on their pro-austerity budget to allow passage of the budget and keep the government in office, provided it went ahead with plans to hold the referendum this year. Under this arrangement, two CUP deputies voted with the government while the other eight deputies abstained to indicate the party’s underlying opposition to the budget.

While this voting tactic, and the CUP’s critical support of the pro-independence government, can be defended on tactical grounds, the unresolved problem — which proved critical on October 1 and in the following days — was that the government had no strategy capable of mobilizing sufficient support for independence and resisting the Madrid government’s repressive campaign to prevent both the popular vote and a declaration of independence. This left the political initiative to Madrid, and while the independence movement, with its pro-austerity majority, has survived it has been unable to advance since then.

The CUP and Québec solidaire have forged strong links, as illustrated at the recent QS congress. But Québec solidaire may soon face some analogous issues, now that it has fused with Option nationale and is preparing to resume its participation in the pro-sovereignty coalition Oui-Québec with the neoliberal Parti québécois and other ostensibly pro-independence forces.