What the mainstream media doesn’t tell you about Venezuela 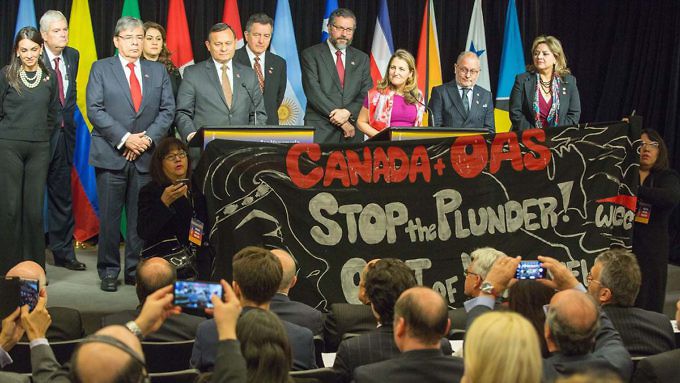 The Canadian government – supported by the Conservative and NDP “opposition” – has joined in a U.S.-led coup attempt against the constitutionally and democratically elected government of Venezuela headed by President Nicolás Maduro.

“We are indeed calling on the military of Venezuela, as we call on all Venezuelans, as we call on all governments of the world, to recognize Juan Guaido as interim president of Venezuela,” Foreign Affairs Minister Chrystia Freeland said after hosting a meeting in Ottawa of the Lima Group, a collection of mainly right-wing Latin American governments plus Canada as the direct representative of North American imperialism.

Guaido recently proclaimed himself “president” gaining instant (and obviously scheduled) recognition of Trump and his allies including the Trudeau government.

I am currently in Mexico, where the newly-elected government of Andrés Manuel López Obrador (AMLO) has refused to join the pro-coup calls of other Lima Group members, now supplemented by similar calls of many European governments. I may write more on this dangerous confrontation, but I think Yves Engler, in the article below, makes essential points about the issues and the role of the Trudeau government. Engler is the author of several recent books on Canada’s international role, including his latest, Left, Right — Marching to the Beat of Imperial Canada.

Reposted, with thanks, from Yves Engler’s blog.

What the mainstream media doesn’t tell you about Venezuela

The corporate media is wholeheartedly behind the federal government’s push for regime change in Venezuela. The propaganda is thick and, as per usual, it is as much about what they don’t, as what they do, report. Here are some important developments that have largely been ignored by Canada’s dominant media:

As well, here are some flagrant double standards in Canadian policy the media have largely ignored:

Beyond what the media has ignored, they constantly cite biased sources without offering much or any background. Here are a couple of examples:

As part of nationwide protests against the “Lima Group” meeting taking place in Ottawa on Monday, activists in Montréal will rally in front of Radio Canada/CBC’s offices. They will be decrying not only Canada’s interference in Venezuela but the dominant media’s effort to “manufacture consent” for Canadian imperialism.