Bolivia: The people defeat the coup

Bolivians have overwhelmingly voted the left-wing Movement Toward Socialism (MAS) back into office in a resounding reversal of last year’s coup. 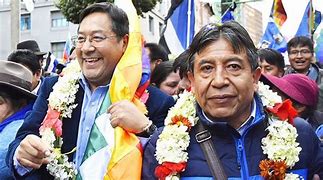 Arce even managed to win more votes than former MAS president Evo Morales did in the October 2019 elections. While Morales won that election, opposition protests against supposed fraud culminated in a police-military coup that forced him into exile just weeks later.

The vote for Arce, who was economy minister during most of Morales’ 14 years in power, represents a clear rejection of those who sought to trample on Bolivia’s democracy and the many achievements of the MAS government, in particular its empowerment of the country’s indigenous majority.

It also represents a defeat for those internationally, such as the Organization of American States (OAS) and the United States government, who backed the coup and subsequent illegitimate regime headed by right-wing senator Jeanine Áñez.

During her time in office, Áñez focused most of her attention on repressing protests, delaying elections and persecuting the MAS and the indigenous, campesino, worker and urban movements that make up its base, in the hope of blocking its return to power.

While her ministers enriched themselves through numerous cases of corruption, Bolivians were left to deal with a deep economic crisis, a sharp rise in poverty and one of the highest per capita COVID-19 death rates in the world.

Importantly, this rejection was not just expressed on election day, but in the mobilisations that took place immediately after the coup and since.

While largely focused in MAS’s rural heartlands and the largely indigenous city of El Alto, the initial protests marked a clear determination on the part of social movements to reject the racist violence unleashed by the coup and win back democracy through street mobilisation.

They did so while working in coordination with the MAS’s majority in the Plurinational Legislative Assembly.

The response of the regime was military and police repression, including massacres in Senkata, Sacaba and Yapacaní last November that left more than 30 dead, and attempts to circumvent parliament.

Nevertheless, the social movements persisted and expanded their reach, with nationwide mobilisations in August crucial to forcing elections to go ahead after they had been postponed three times.

Through these protests, social movements began a process of renewal and revitalisation, which enabled them to regain some of the strength and autonomy they had lost in recent years.

Some of the new leaders that emerged through this struggle have now been elected to the new parliament on the MAS ticket.

The vote for Arce was also due to the MAS’s ability to regain support among certain sectors — particularly urban, middle class voters — that had turned their backs on the party.

The opposition aided this process, through the manner in which Áñez governed and their inability to present any coherent project beyond simply opposing the MAS.

But the MAS campaign was also crucial, starting with its decision to select Arce as the presidential candidate. This was despite MAS’ core rural base preferring former foreign minister David Choquehuanca, due to his close links to these movements.

The consensus decision to go with Arce — with Choquehuanca as his running mate — was based on the judgement that he was the best candidate to reach out to more moderate sectors and win back this broader support on the basis of the prestige he had from presiding over years of economic boom.

From this starting point — renewed social movements and Arce as candidate — the MAS set about campaigning hard, particularly in areas where their vote had dropped.

They did so by presenting a project for the country, with concrete solutions to the problems sectors were facing. At the same time, Arce and Choquehuanca publicly acknowledged some of the errors made during Morales’ time in government, demonstrating a willingness to listen and learn from mistakes.

The election result means the MAS have a clear mandate to continue building on the achievements of Morales' time in power, while working to fix errors.

Arce is not wasting time, having already indicated what his government’s first steps will be to deal with the impacts of the pandemic and economic crisis.

The day after the elections, Arce announced that distribution of a special hunger payment — already approved by parliament but blocked by Áñez — will begin within weeks, as part of helping ameliorate the effects of the crisis and stimulating internal demand.

Along with signalling his intention to introduce a wealth tax, Arce has said his government will seek to renegotiate its foreign debt with institutions such as the International Monetary Fund for the purpose of deferring or cancelling repayment, as a way to “to share the weight of the burden of the pandemic”.

There will no doubt be many challenges ahead.

Small violent protests by ultra-right forces rejecting the election result indicate they do not plan to go away without a fight. Nor will those foreign governments that have always opposed the MAS in power.

Seeking justice and reigning in the military will not be easy, given the military’s refusal to date to cooperate with the investigation into the massacres last November.

And figuring out how best to handle the complex relationship of being government and social movements at the same time — with the latter’s renewed sense of autonomy and immediate pressure for posts in the new administration — will require profound debate and reflection. As will working out what role Morales will play in this new period.

But for now, Bolivians will celebrate their defeat of a reactionary coup through the exercising of peoples’ power.

* Federico Fuentes, an Argentine-Australian, writes regularly on events in Latin America in Green Left Weekly, from which this article is reproduced with thanks. He was co-author with Marta Harnecker of the book MAS-IPSP de Bolivia: Instrumento político que surge de los movimientos sociales (Caracas: Centro Internacional Miranda, 2008).