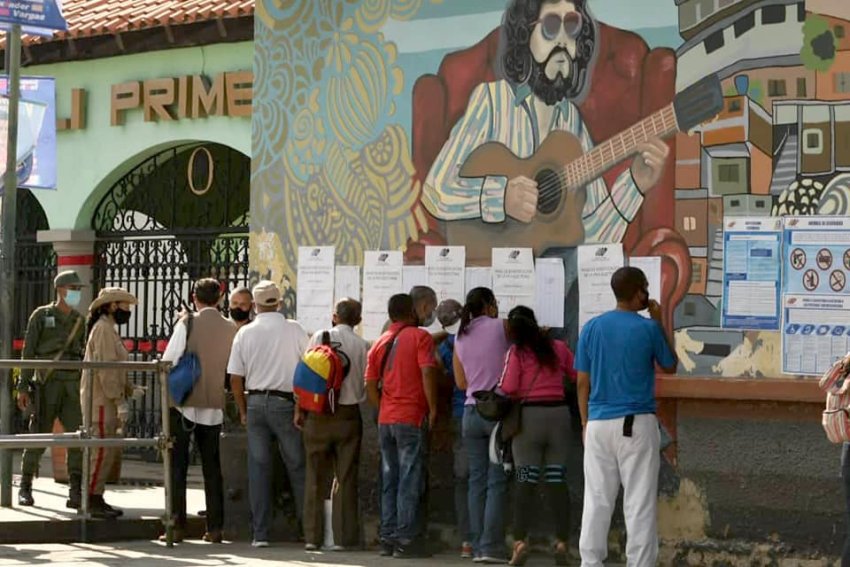 With a majority of the opposition boycotting and an abstention rate of almost 70%, the governing United Socialist Party of Venezuela (PSUV) obtained 69% of the vote in the country’s December 6 National Assembly (AN) elections. The PSUV and its allies will now hold 253 of the 277 seats in the new parliament.

This is in sharp contrast to the 2015 elections, when the right-wing opposition won an overwhelming majority in the AN, and announced it would remove President Nicolas Maduro from power “within six months”.

Speaking on election night, Maduro said it was crucial for the new AN to open up a national dialogue involving all political parties and economic and social sectors “to discuss a national agenda for economic recovery”.

Addressing the opposition, he called on them “to make use of [US president Donald] Trump’s defeat to abandon its extremist path, and ask that the sanctions on Venezuela be lifted.”

US-imposed sanctions have crippled Venezuela’s oil industry, blocked the country’s access to international financial markets and scared off potential investors under threat of financial punishment. The result of these sanctions has been devastating on the country’s economy and the lives of millions of Venezuelans.

Taking up Maduro’s call, newly-elected opposition deputy Luis Eduardo Martínez said the inauguration of the new AN on January 5 would “mark a new era of peace and reconciliation, in which all National Assembly deputies should work together to overcome the difficult situation Venezuela is going through”.

“The priority has to be to work towards ending the international, immoral and unjust sanctions, which hurt everyone equally, and recovering the republic’s assets abroad to enable access to fresh funds to attend to urgent needs, especially those arising from the [COVID-19] pandemic,” he said.

This turnaround from five years ago can, in part, be explained by the failures of the strategy pursued by hard-line elements within the opposition. Since 2015, they have sought every avenue possible to depose Maduro, including violent protests, economic warfare, attempted assassinations, calls for a military coup, paramilitary incursions and support for economic sanctions and foreign intervention.

But, with little to show for all this, and demoralisation rising within the opposition’s base, more moderate sections have sought to pursue their own independent path. This led to a group of opposition leaders agreeing to enter into dialogue with the government and ultimately participate in the recent elections.

Discussing this process of convergence between the government and more moderate sectors of the opposition, Latin America researcher and author Steve Ellner wrote that it was, in part, the result of “Washington's policies and the untold suffering they have inflicted on the Venezuelan people”.

But he also believes it was a product of “Maduro's adroit strategy of accepting some of the demands of the centrists, while pursuing a hard-line approach against the insurgent opposition.”

The importance of this convergence, said Ellner, lies in the fact that “the emergence of a bloc of non-leftist parties that either explicitly or tacitly recognise the legitimacy of Venezuela’s political system could pave the way for a new era in the country's politics devoid of the internecine warfare of the past”.

Together with the lifting of the sanctions, it would represent a tremendous leap towards lifting Venezuela out of the years-long crisis it has been engulfed in.

But this strategy has come at some cost to the government.

Revolutionary activist and former Maduro minister Reinaldo Iturriza told Green Left that, as part of this strategy, the government decided it was necessary to grant concessions to business interests in pursuit of “forming an alliance with certain sections of the capitalist class”.

The problem, Iturriza stressed, was not the alliance per se, as “being in a position of weakness, it is not only predictable, but even correct, sensible and recommendable to cede some ground, while reorganising your forces.

“However, what has occurred since then has resembled a disorderly retreat more than anything else.”

As the economic situation worsened with the dramatic tightening of the sanctions in 2017, the government’s policy has largely been to simply offer further concessions.

By 2018, according to ex-minister for the productive economy Luis Salas, the government was essentially implementing the kind of monetary policies adopted by neoliberal governments in the region, “not because of its conviction, but in order to survive”.

The result was the pulverisation of workers’ wages (now the lowest in the region), rising poverty and a de facto dollarisation of the economy that has largely benefited those sectors that can get access to dollars, either due to their wealth, access to the state or corruption.

Acknowledging this reality on December 9, Maduro said: “I recognise that we have gone backwards regarding socialism as a result of the battle we are engaged in, but the battle is not lost.”

Describing the de facto dollarisation as an “escape valve” people have used to overcome the economic war inflicted on Venezuela, he added: “We are going to protect workers’ incomes. When are we going to do it? When Venezuela is able to completely break the blockade, when it recuperates its income from exports.”

In the meantime, protest numbers continue to rise across the country. While the Venezuelan Observatory of Social Conflicts is yet to put out figures for November, its October report noted it was the most conflictive month so far in 2020, with almost 1500 protests taking place, including an average of 18 a day over the issues of wages.

Drawing up a balance sheet of this period, Iturriza said “there is more than enough evidence to show that, in attempting to find a way out, we have ended up deeper within the labyrinth.

"If what occurred was a disorderly retreat, then what is required now is to reorganise our forces to be able to go back on the offensive.”

The need to reorganise forces was a key factor in the decision taken by dozens of political parties, community organisations and social movements to set up the Revolutionary Popular Alternative (APR) to stand candidates against the PSUV.

In the end, however, the APR won just 3% of the vote and elected a solitary parliamentarian.

The APR largely put this down to the unfavourable conditions in which they competed: several parties involved in the APR were subject to court interventions and had their electoral registration handed over to minority pro-PSUV factions, while state media outlets refused to cover their campaign.

But it is more likely that the APR’s discourse, which focused on attacking the government rather than proposing genuine solutions, failed to gain any real traction among Chavistas.

This can in part be attributed to the strong desire for unity among an important section of Chavistas who viewed voting for the PSUV as the best option, regardless of any criticism they may have of the government.

But the APR also failed to mobilise even a small fraction of the millions of former and current Chavistas who chose not to vote.

“We have a government that, without doubt, has had the merit of resisting successive violent poundings and, despite everything, has remained in power, but at a terribly high cost in strategic terms,” Iturriza said.

“If I had to summarise the profound impact this situation has had in the popular camp, I would say that what we have seen is a phenomenon of mass political disaffiliation.”

“In my opinion, the largest political bloc today could be described as being composed of disaffiliated Chavistas,” he said. They do not see themselves reflected in “the government or the PSUV”.

Faced with this challenge, Iturriza said the left needs to “recover the fundamentals of revolutionary politics”.

“That is where we need to do politics.”