“It’s a bill designed to kill the student associations, but also to silence an entire population…. This law is far worse for freedom of expression than the 75% increase in tuition fees might be for accessibility to education,” said Léo Bureau-Blouin, leader of the FECQ.

Bill 78, tabled late in the evening last night by Quebec’s Liberal government, is draconian legislation. Here are its main provisions, which as I write are still being debated in the National Assembly after an all-night session.

With this law, Quebec is “sliding toward authoritarianism,” said Gabriel Nadeau-Dubois, co-spokesman for the CLASSE, the major student association that represents about half of the strikers. This is a law that “challenges fundamental liberties” and “recognized constitutional rights,” he added.

Pointing to the bill’s attack on the rights of association, demonstration, and speech, Opposition leader Pauline Marois compared the bill with the federal War Measures Act, used by Trudeau to jail hundreds of Québécois in October 1970. Premier Charest, the PQ leader said, “has no further moral authority or legitimacy to govern.”

Amir Khadir, the Québec solidaire member of the National Assembly, attacked Charest for constructing “a police state around the academic community and threatening all those who work in education with his judicial, police and financial bludgeons.”

“This is a dark day for Quebec,” said QS president Françoise David. “Tonight we solemnly appeal to the student movement, the popular movement, the committed artists, the socially responsible lawyers and jurists, the trade unions, the parents worried about the escalation in violence, to put up a determined and concerted resistance in order to make this law unworkable….” 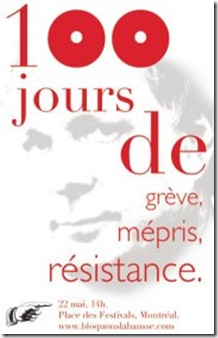 Earlier in the day, leaders of the FEUQ and FECQ held a news conference accompanied by Marois, Khadir, and other MNAs in a last-minute appeal to the government to negotiate in good faith with the students. Significantly, they were joined by Laurent Proulx, a leader of the “green squares,” a student group that has initiated many of the anti-strike injunction proceedings in the courts. He said his “movement of socially responsible students” supported the position of the former head of the Quebec Bar, who had publicly called for mediation, not a special law, to resolve the tuition fee protest.

Also attending the news conference was Robert Michaud of the “white squares for social peace” movement, formed by concerned parents in the aftermath of the extreme police violence in repressing a pro-student demonstration in Victoriaville early in May.

However, their efforts to head off Charest’s repressive legislation have failed. It now remains to be seen whether these forces can respond to the law with the “concerted resistance” that Françoise David calls for.

The mass demonstration planned for next Tuesday, May 22, in Montréal will be an early opportunity to initiate this defiance.