François Cyr, a leading member of Québec solidaire and prominent activist and theoretician of the Quebec left, died May 5 in the aftermath of a brain tumour operation. The following is my translation of a tribute to François by Pierre Beaudet, one of his closest collaborators in the editing of the journal Nouveaux Cahiers du Socialisme, where this article first appeared. I follow it with some memories of my own.

Our friend François died today, Saturday May 5, at the Charles Lemoyne hospital after a short and sudden illness. He had just turned 60, and up to the very last he was actively devoted to his many professional and political commitments. He will be missed by many. 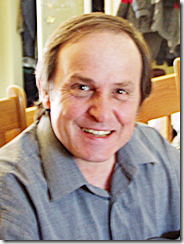 François began at a very young age in the student movement on the South Shore of Montréal, then at the Cegep[1] de Vieux-Montréal. He was subsequently active in the radical left of the Seventies. In the Eighties, he completed a master’s degree in political science at the UQÀM,[2] writing a dissertation on the national movement of the Acadiens.

The national question was a constant source of fascination for François. He was persuaded that the traditional approach of the left was unsatisfactory and required rethinking. With a number of trade-union and political comrades of those days he contributed to the huge debate on this question, which allowed the left to play a role in the 1980 referendum and the later resuscitation of the mass movement.

Until the Nineties he worked as a part-time lecturer, a difficult job that took him to various points throughout Quebec. Through countless encounters he wove a large network of committed individuals who responded to his openness and generosity. He also completed a law degree, and became involved in the defense of the unemployed, mistreated trade unionists, and all those whose rights were being violated, working with his comrades at the progressive law firm he helped to create.

François was untiring and a marvellous organizer. While pursuing his teaching career he was a leading participant in the unionization of lecturers at the Université de Montréal. Finally hired as a full-time professor at the Cegep d’Ahuntsic, he devoted much effort to strengthening one of the most militant unions in the academic community. As an active member of the FNEEQ, the teachers’ federation of the CSN, he was elected to the executive for several years until the early 2000s. As we saw recently, in the context of the student strike, the FNEEQ became a union with an activism that extended beyond the CSN and the trade-union movement as such. Modest, methodical, loyal, standing apart from the interpersonal tensions or frictions that are all so common, François was, it can be said in all honesty, the friend of (almost) everyone.

Meanwhile, and over and above all of these battles, François sought to combine the social struggle with the construction of a political perspective. He participated in the establishment of the Rassemblement pour l’alternative progressiste, in 1996, and in the unification of various left parties within the Union des forces progressistes in 2002. One year earlier, this left-wing grouping had achieved an initial electoral breakthrough with the campaign of Paul Cliche in Mercier riding.

François was pleased with these advances, but he continued to think that the convergence should go further. He was in the forefront of those who sought a rapprochement with Françoise David and her comrades in D’abord Solidaires, which resulted as we all know in the creation of Québec Solidaire, in 2006.[3] During this crucial period François chaired the policy commission and played an absolutely central role in the genesis and development of QS. Likewise, he helped in the election of Amir Khadir, with whom he remained a close friend to the very end. François was a QS candidate in Marie-Victorin riding in his old bailiwick south of Montréal Island. Shortly before his illness, he was chosen as the QS standard-bearer once again for the forthcoming elections.

François was also a man of reflections and ideas. He was a passionate reader, engrossed in history. He thought the contemporary left should create and innovate, but without reinventing the wheel. This was, in some ways, a point of departure that led him, in 2005, with a few friends and comrades, to a new project that took the name Nouveaux Cahiers du Socialisme (NCS). Throughout these recent years he organized and chaired the debates within NCS, including most recently a meeting in March when we discussed — guess what! — the Quebec national question. Many of his writings can be found on the NCS web site, as well as that of Presse-toi-à-gauche.

François Cyr leaves behind his companion Carole Potvin, his daughter Annie, his brother and his two sisters, as well as a more extensive and tightly knit complex of family members. He leaves as well a vivid memory among the hundreds of militants with whom he worked directly, not to mention the others who knew him in the trade-union movement, in education (including his students), in Québec Solidaire and elsewhere.

A tribute to François will be held in June, the place and date to be announced before long.

I first met François Cyr in the mid-1970s, when the two major components of the Fourth International in Canada fused to form the Revolutionary Workers League (the Ligue ouvrière révolutionnaire in French). François was at the time the editor of the newspaper of the Groupe marxiste révolutionnaire; I was editing the newspaper of the League for Socialist Action. Introducing us to each other, a comrade quipped that François was my Francophone “vis-à-vis.”

Within a very few years, both François and I had parted company with the RWL/LOR and, independently of each other, went on to (among other things) study law and pursue other career paths, he in Quebec, I in Ontario.

It was not until 10 years ago, with the founding of the Union des forces progressistes, that François and I renewed acquaintances. As president of the UFP, he piloted the fusion with Option citoyenne to form Québec solidaire and later served as chair of QS’s policy commission. During this last decade, while attempting to publicize the development of this promising left initiative to an English-speaking audience outside Quebec, I found my thinking shaped in part by François’ understanding of the centrality of the Quebec national question to Canadian left politics, and I had occasion to reflect (sometimes critically) on his conception of the refounding of the Quebec left and the lessons that experience might offer for a process of recomposition of a radical left in English Canada.

François was an innovative thinker, perpetually dissatisfied with simplistic formulas that so often substitute for “a concrete analysis of the concrete situation.” Nowhere was this more evident than in his perceptive thoughts on the national question. In a book on the Quebec Federation of Labour and the national question that he co-authored some thirty years ago,[4] he drew attention to “the singularity of the [Quebec] provincial state and its role in the evolution of Quebec nationalism,” writing:

“This is a decisive element in the analysis of Quebec’s insertion in the Canadian Confederation. Since the beginning of the 1960s, the Quebec state appears as a contradictory phenomenon. On the one hand, like the other provinces, it must be considered an integral part of the Canadian state, in part a regional relay of imperialist domination. On the other hand, subjectively, it is perceived by broad sectors of the population as a specific institution crystallizing on the political and juridical plane the national aspirations of the Québécois people. In addition, it can be analyzed as the political instrument of significant sectors of the Quebec bourgeoisie. The particular features of the Quebec provincial state will heavily influence the evolution of Quebec nationalism, including within the working class….”

In the numerous tributes to François now being expressed in cyberspace, many note how his passing coincides with a new rise in struggles in Quebec that must have inspired him with hope for the future during what turned out to be his final months. We can only regret that he will not be with us to share in these experiences, and to help us understand them. And he will be missed for his notable ability to find common ground for active solidarity with many others, notwithstanding whatever disagreements they might have on questions of secondary importance.

[3] For an account of these developments, see “Québec Solidaire: A Québécois Approach to Building a Broad Left Party,” Part I and Part II.